Vitebsk is one of the oldest cities in the country, located in the northern part of Belarus. The article will tell about the history of the city, its sights and cultural life.

The history of the city begins in 974, because this year the city of Vitebsk was founded by Princess Olga.

The existence of the city is confirmed in 1021 in the Sofia First Chronicle. A little later the city became the center of the Vitebsk principality.

Around 1320. Vitebsk became part of the Grand Duchy of Lithuania. The rulers immediately began building the stone walls of the Upper and Lower Castles, which ended in 1351.

Further, the city was awaited by tragic events, because by order of Peter I, Vitebsk was burnt down, and only in 1760 began its restoration.

After 10 years, the city became part of the Russian Empire with a population of just over 3 thousand people. Life began to return in the city, the first public school was opened, as well as the first secular library.

But Vitebsk could not get around the events of the French war. From July 16 to October 26, 1812, the city was occupied by French troops.

In the 20th century, many cultural figures were born on the territory of modern Vitebsk, who left a big mark on the history of the country. The most prominent was Marc Chagall (1887 - 1985). At the same time, Yudel Moiseevich Pen settled in Vitebsk, who was the teacher of the aforementioned cultural figure.

In 1905, cinematography came to the city, the first cinema was opened.

Vitebsk was not spared the tragic events of the Great Patriotic War, so most of the soldiers gave their lives for the freedom of civilians. During the occupation, the city was completely destroyed; after the liberation, only 118 residents remained in the city.

On July 18, 1992, the first international festival "Slavianski Bazaar" was opened, which to this day gathers artists.

In Vitebsk you can often meet tourists who come to admire the beauty of the Euroregion Lake District. Among foreigners, the most common are Russians and Lithuanians, because the border with Russia and Lithuania is located at the shortest distance from the city.

• Railway, located in the western part of the city on the right bank of the Western Dvina.

• Oktyabrsky, located in the north-east of the city.

• Pervomaisky, consisting of two large parts, located along the banks of the Western Dvina and Lucosa in the southern part of the city.

The main attractions of Vitebsk

The most famous international festival in Belarus, popular for over 20 years. The event includes concerts, competitions with cash prizes, performances and all kinds of exhibitions.

It is known that in the 18th century the cathedral was built in order to create a Uniate church. Unfortunately, the building was blown up in the 1930s. It was restored only in 2011, the architectural decision was made in the style of the Vilna Baroque.

The building of the city administration in the historical center of Vitebsk, built in 1775. The first such structure was a building built in 1597 during the existence of the Magdeburg law system. You can see that the building belongs to the Baroque architectural style.

The street represents the historical value of the city, and is named after the famous Russian commander. Its length is about 1.3 km. Throughout the street you can see buildings and monuments of the 18th century, as well as buildings with unique architectural solutions.

The attraction was built in honor of the memory of the feat of the people. The area stretches 380 meters. In 1974, a memorial complex was erected here in memory of the soldiers who bravely fought for the freedom of future generations. 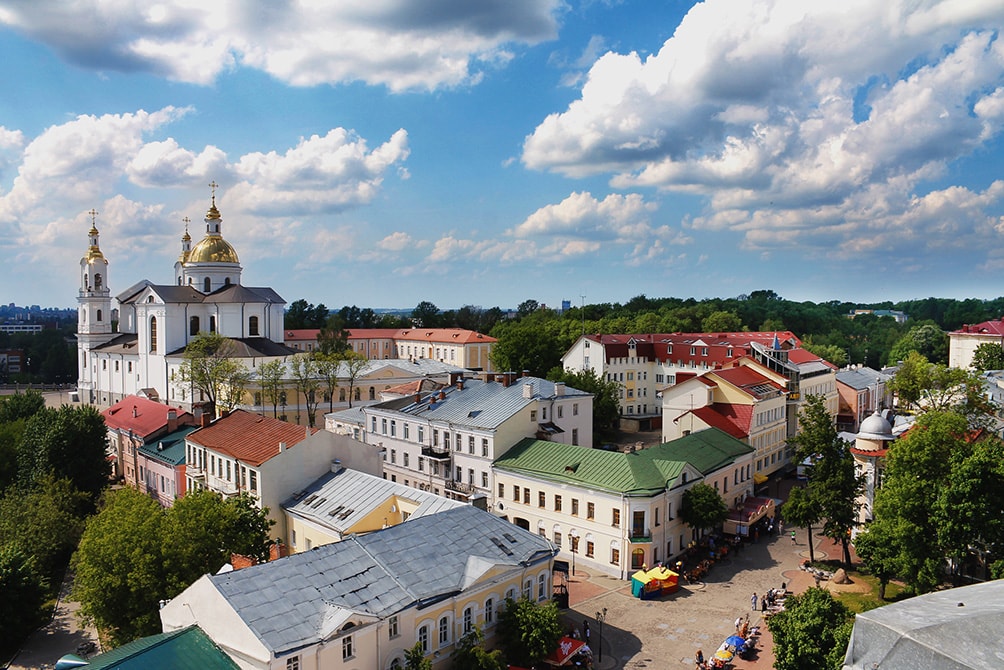 The architecture of the city amazes everyone who arrives. It seems that it is thoroughly imbued with the talent of folk craftsmen - whether it be a building that has come down to us through the prism of centuries, or modern urban development.

As a contrast - modern architecture, which gives a unique look to the culture of Vitebsk and at the same time serves as an original frame of the historical pearls of the city.

The coat of arms of modern Vitebsk is based on the profile of Jesus Christ depicted on the blue field of the Spanish shield. You can see that there is a feeling of deep patriotism and chivalrous self-awareness. The dominant blue color is a symbol of greatness, loyalty, impeccability, and also emphasizes the movement forward towards dreams and hopes.

Culture and sports in Vitebsk

Sports activities are well developed in Vitebsk, and young people are taught a love of sports from an early age. Thus, 56 sports establishments function throughout the region. Today Vitebsk athletes train in such institutions as the Ice Palace, the sports complex of FC Vitebsk, a specialized center for trampoline jumping, etc.

Along with sports activities, Vitebsk instills a love of art. You can spend an evening according to the cultural program in the Vitebsk Regional Museum of Local Lore or at the international festival Slavianski Bazaar.

Vitebsk region borders on three countries and has a developed road infrastructure. Several highways of international importance pass through the region.

Public transport in Vitebsk is buses, trolleybuses and minibuses. They can take you to any area of the city. There are no problems with the schedule - the transport runs regularly.

Those who prefer a higher level of comfort can use air transport. Vitebsk has its own airport, which serves all passengers wishing to travel. The schedule can be found on the official website of the airport or by phone at the registrar.