A large number of rich and noble families lived in Belarus. Several centuries ago, they equipped their nests on a large scale. And what is happening to them now? Which of the estates have remained intact? We will talk about each of them in this article.

The Valovich Palace was built by the Italian architect Giuseppe Sacco at the end of the 18th century. He tried so hard on the project that the palace is still compared to Versailles itself. The Valovichs contributed a lot of the family budget to the construction and rebuilt their palace for two generations. Ironically, immediately after the rebuilding, one of the owners lost the entire complex to a neighbor in billiards. To understand the picture of the loss, the complex consisted of three buildings, the main of which is in the very center - with two floors, a sloping roof and an attic under it. The whole thing is connected by charming galleries with colonnades. Around the estate there is a magnificent park of pleasant evening walks; nearby there is also a reservoir, where newlyweds often come. Today the palace can be seen in its original form.

The famous family took possession of the estate at the beginning of the 18th century, a hundred years later Zalesye passed to Mikhail Kleofas, who, as we know, was defeated, so the famous composer had to leave for a while. Having received the amnesty, he hastened to return and begin the rapid reconstruction of his estate. The work took as much as 20 years, but this also with an English-style park and various outbuildings. Throughout the entire time, the composer liked to arrange musical evenings on the estate; having seen all the beauty, the composer composed his polonaise, the atmosphere is favorable.

To date, the manor has been restored, they conduct theatrical excursion programs here, give lectures and offer to drink coffee in a nice greenhouse. Check the current schedule and hurry up to spend a weekend or even your own wedding here. 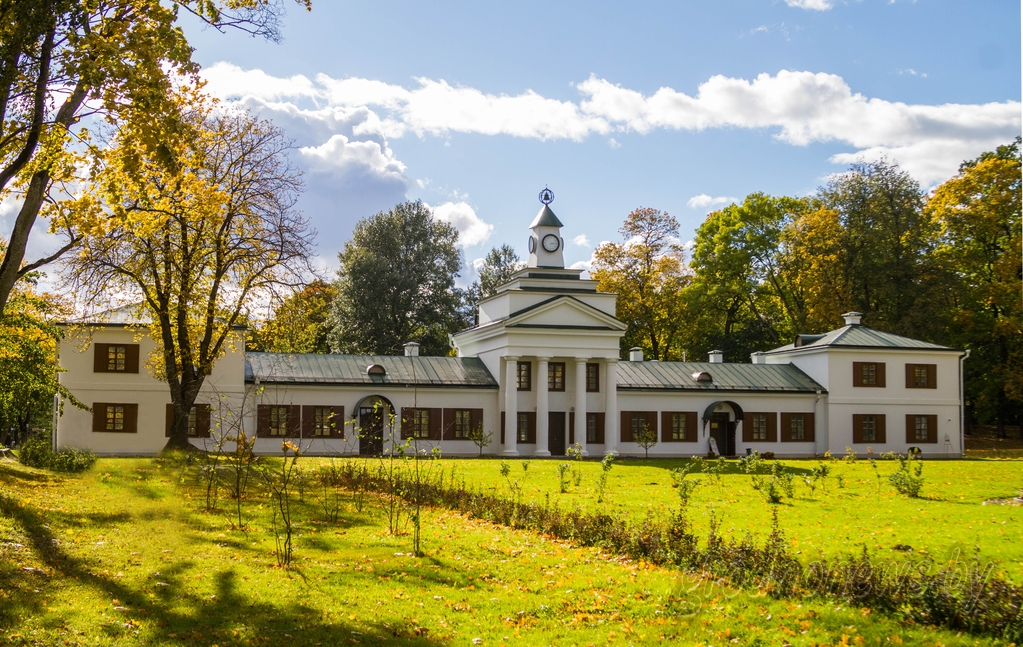 The Tizengauz Palace is the best example of buildings in the style of classicism. Here you have columns, decorated facades, and the famous layout in the form of the letter "P". The construction of the palace was started by Anthony, the most famous representative of the family dynasty, and finished by Constantine. The palace was made for an unusual request, because this palace was rebuilt mainly for research, and not for life. A cabinet of mineralogy, zoology and so on was built here. But the main surprise went to their favorite birds: they organized an ornithological museum, where they collected more than 3000 stuffed animals.

Today, a local hospital functions in the estate and even a museum is opened - a branch of the local local history.

The Gatovsky estate is not like any of the above palaces, as it is made in different architectural styles: from Gothic to oriental motives. It can rightfully be considered one of the most fascinating buildings in Belarus. The estate was named after Gatovsky, he purchased the estate itself, but shifted its construction onto the shoulders of Kozell-Poklevsky. By invitation, the St. Petersburg architect Schreter came to the estate and decided to implement all his crazy ideas. Some believe that such an unusual idea is the initiative of Kozell-Poklevsky himself: as if, having visited Europe, he chose interesting details of the buildings for himself and decided to personify them in his estate. The estate survived the First World War by providing space for a hospital.

The restoration of the building lasted 20 years and ended 2 years ago. The exterior was neatly tweaked, and inside a museum was opened, where you can walk through the halls decorated in different styles, and also make a few "pas" in the ballroom.

The estate originally belonged to Catherine II, and already she gave the palace to Dmitry Tolstoy. Tolstoy began to decorate the estate - which is at least a grand staircase and a dome. The family was not limited only to the palace, so a park with various trees was laid out around.

Historically, the last person to have a hand in the estate was Alexandra Tolstaya. Under her command, a hospital was built next to the estate, where Alexandra hired the best doctors. She paid for the work of the hired staff herself. But after the end of the revolution, the family had to leave the estate.

Today, tourists are not given the opportunity to visit the estate, but there is no need for it, since the former grandeur is not left there, inside there are typical Soviet interiors.

The palace is an architectural monument of the 18th century. The order for the building was drawn up by Mateusz Butrimovich, and the first stone was laid by Stanislaw August Poniatowski.

After the liberation of Pinsk by the Nazi invaders, the palace was given to a printing house, and later a cinema was built on this site with the proud name "Pioneer". And later it became the home of the pioneers themselves.

Today the palace provides an opportunity for getting married (since April 25, 2009).

In the small village of Pavlinovo there is the Bohvitsa estate. The first owner of the estate was Jan Bochwitz, the son of the famous philosopher and writer Florian Bochwitz. He bought and set about building it: initially he laid out a park with a magnificent garden, and later a distillery and a neo-Gothic estate. Bokhvits himself named the Pavlinovo estate (after his mother), but now the whole settlement is named after him. Bohvits loved the new estate, tastefully arranged, quickly grown in the middle of the forest, often gathered together by the whole friendly family.

Another abandoned estate caused by the accident at the Chernobyl nuclear power plant.

The estate, with an area of ​​7 hectares, was built in 1876 by Nikolai Gerard. While in power, he recruited two Finns, for which he was removed from office. The Gerard manor was built in the style of old Russian architecture. The palace looked favorably due to the interesting decoration of the windows and the rectangular tower.

During the First World War, the floor of the Russian army was located here. And after the war, the pioneer camp. Today, you can get to the estate only with special passes.

The Ivanovskys' estate is one of the top examples of modern Belarusian estates. The idea and execution of the building belongs to Leonard Ivanovsky. After the development, the building was called "Ivanovskaya Winch". Yuri, the son of Leonard and also a bird lover, opened a winged museum on the estate.

Today, there is a functioning boarding school in the estate, but you can enter the territory.

The Plater Palace was built in 1904 by Count Felix Plater. The manor is made in a neoclassical style.

The palace itself is one-story, but there are two-story outbuildings on both sides. There is an open terrace above the lake, the descent to the water is a cascade of stairs. A residential wing and several outbuildings have been preserved on the territory of the estate.

In 1922, Felix sold the estates to build an agricultural school, and after World War II, there was a home for the disabled on the site of the estate.

Today the estate is abandoned and not suitable for tourists.