Holszany, the village in Hrodna Region, is the place people call “an open-air museum”. The historical and architectural heritage of this place is an example of castle, church and residential types of building. The cultural objects of Holszany and the original inside planning, which looks like a perpendicular street intersection, make the village look very authentic and help channeling the ambiance of the past centuries. But the main reason why people visit this place is famous Holszany Castle.

From XIII until XVI centuries Holszany were the residence of the Holszanski family, very noble and powerful magnates, who played an important role in the life of Grand Duchy of Lithuania. In XIV – XV centuries, when Holszany were the center of an apanage principality of GDL, the village had its first period of prosperity. Later the princess Elena Holszanska got married to Deputy Chancellor of Lithuania Pawel Stefan Sapieha, which made the Sapieha family the owners of Holszany. Pawel was the one who build the castle in the beginning of XVII century (circa 1610) and made it the Spiehas’ residence. In the same time, the Catholic Church of the Franciscans was built; in contrast to the castle, it has remained completely till our days. The castle is placed outside of the village and once was surrounded by earth mounds and moats filled with waters of River Holszanka.

Due to the fact that Pawel Sapieha didn’t have heirs, the castle saw a change of various owners. In the beginning of XVIII century, during the Great Northern War with Swedes the building was severely damaged for the first time. By the end of XIX century its current owner, the Russian landlord named Gorbanyov started blowing the walls and selling bricks for a tavern construction. Even more damage was made during both World Wars, but surprisingly the building was liveable until 1939.

The castle hasn’t been preserved completely. Two towers and the east wing is all that left, but researchers are not sure, what the castle looked like originally (in XVII century) so it’s considered that the full refurbishment would destroy the uniqueness of this object. Currently restoration works and conservation efforts take place here to keep the vestiges safe. 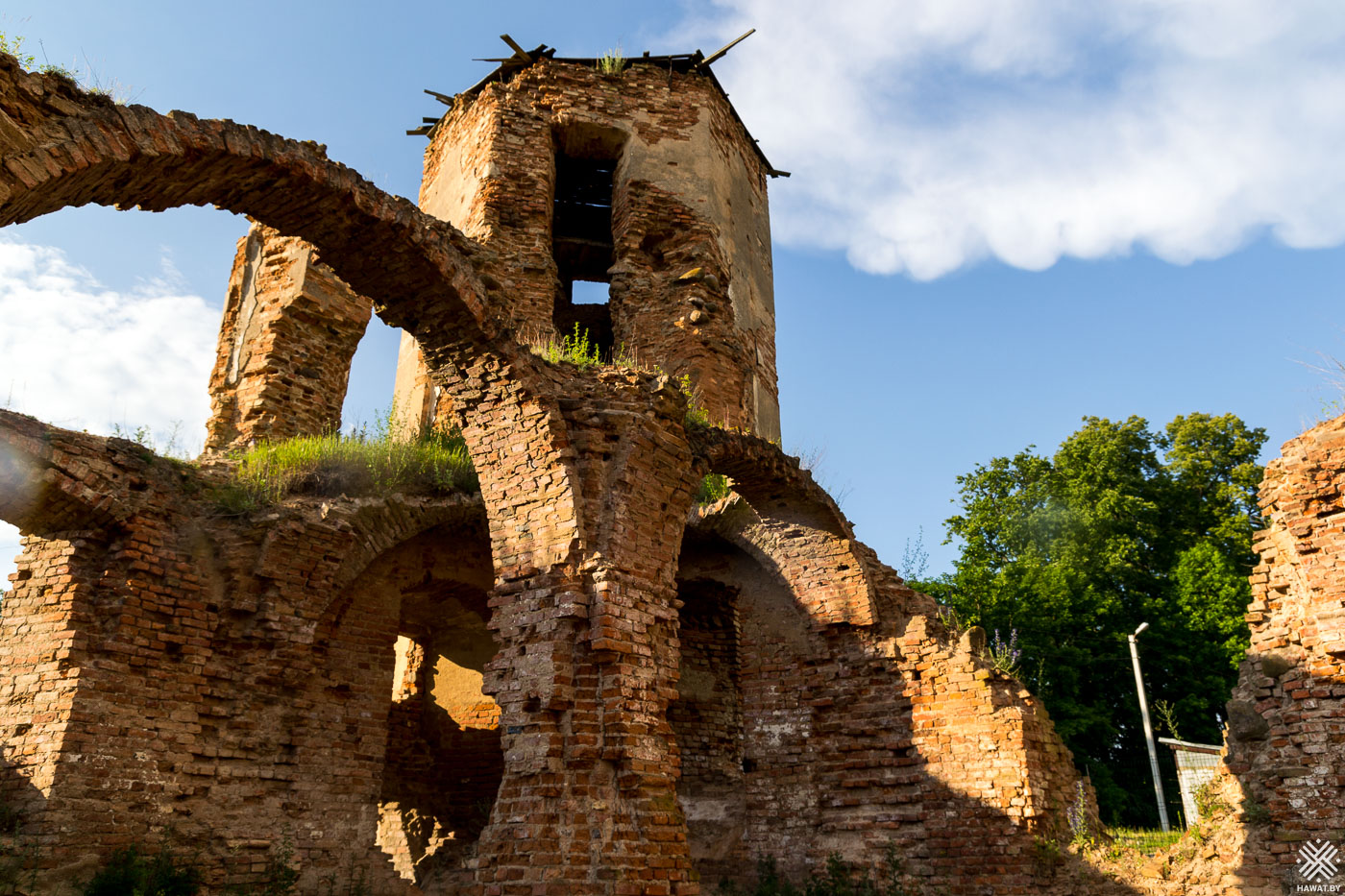 Legend has it that Pawel Stefan Sapieha commanded to build the Catholic Church and the Monastery of the Franciscans and promised to pay a lot of money if they manage to finish it on time. Bricklayers were rushing, but one wall fell down for three times in a row, so they decided to sacrifice a wife, who would be the first to bring a dinner for her husband. One of the workers, who had recently got married, was praying all night long for his young wife to be late, but she came first and was buried alive in one of the walls. Since then people believe that her soul wanders the allures of the building.

Once a poor young man named Hremislav Valyuzhinich fell in love with a princess named Hanna-Hordislava Holszanska. She returned his feelings, but her father, a proud magnate, ordered to bury the man in the wall of the castle. Since then the shadow of the Black Monk walks around the halls and protects the half-ruined castle from intruders.

Holszany and its legends also inspired the Belarusian writer Uladzimir Karatkievich to write a novel “The Dark Castle Olshansky”, which was later translated into various languages. 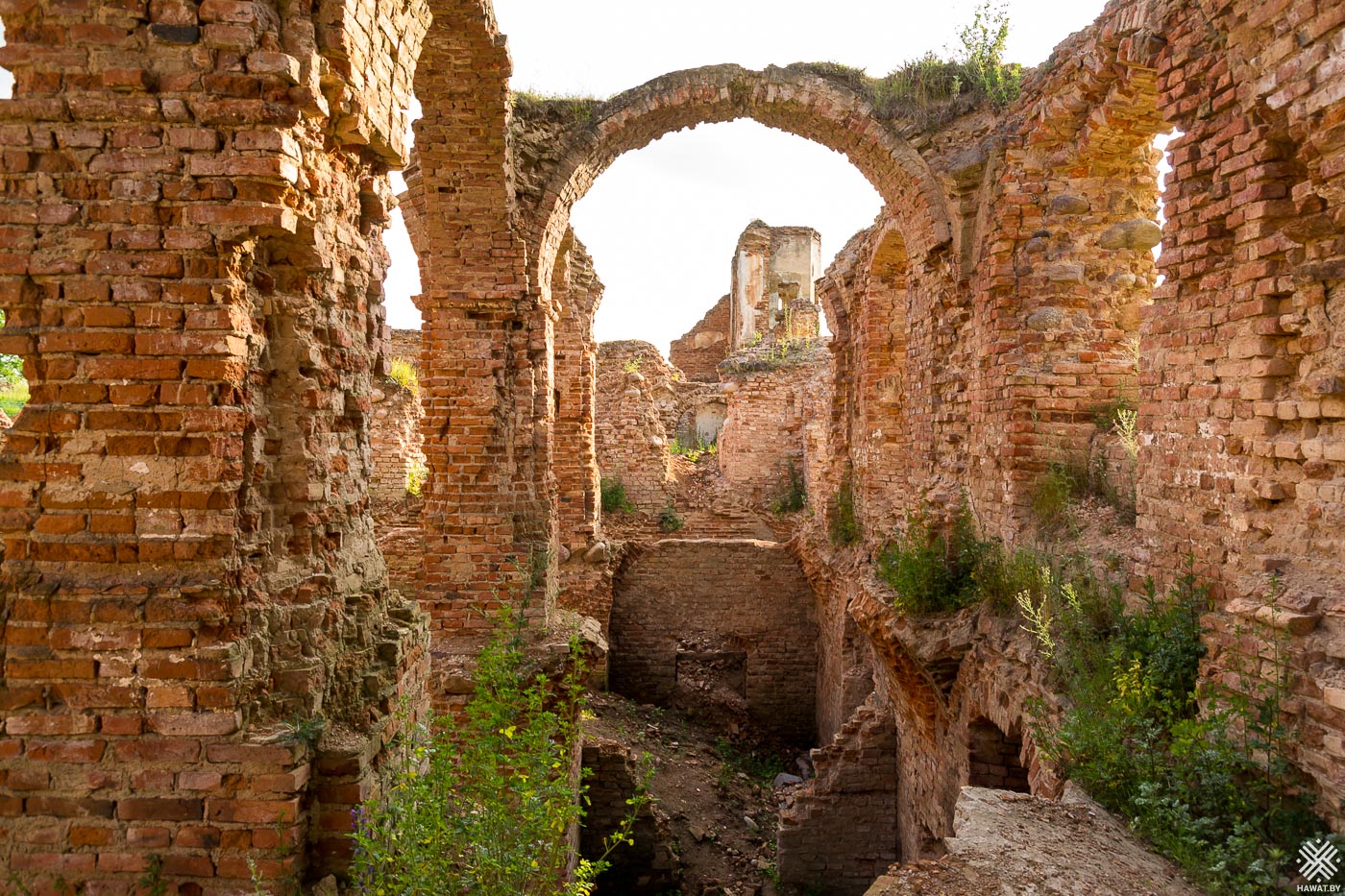 The construction of the castle

Originally, the castle was a rectangular building 89×96 m. Two-floors accommodations joined into a closed yard surrounded with six-sided towers in each corner and a five-sided one in the center; it also was an entrance. Opposite the entrance, there was a built-in chapel, which is now damaged. The castle was covered in clay shingle. The common opinion is that the composition of Holszany Castle is similar to Mir Castle: it also has towers in the corners and jointed accommodations. The difference, however, is that Holszany Castle is bigger and its towers were for living, not fortification.

The Sapiehs were a rich family, which is why they were able to build three artificial lakes with a tiled bottom and collect a unique library and a lot of paintings and weapons, that, combined with tapestry, were hung on the walls.

The architectural style of Holszany Castle

Regarding the architecture of the castle, researches have different opinions: some say it was built in the style of Baroque, the others see it as Netherlandish Renaissance. The facade appearance is often compared to Cleydael Castle in the province of Antwerp, which is no surprise: because of close merchant and cultural connections with Western Europe Belarus was influenced by Dutch and Flemish architecture. Thus, from the end of XVI until the beginning of XVIII century residences of the Polish-Lithuanian Commonwealth magnates had arcaded galleries, corner towers and enfilade layout.

The interior decoration remains a mystery, because these elements of the building were destroyed. It is known that the walls were decorated with the technique of stucco, which is now gone. The ceilings were adorned with murals and plasterwork, the floors – with mosaic cobbles. The windows facing the yard were made of thick stained glass. This wealth was the reason the castle was called “the stone flower”. Tourist attractions near the castle

Despite the castle being outside of Holszany, the village also has some objects of interest.

Catholic Church of the Franciscans

This example of Baroque architecture was built in XVI century, but got reconstructed in 1618 and the second half of XVIII century, when, according to researches, the original church was demolished to the ground. However, since then it was possible to keep the mural on the flat wall of the altar.

Near the church there is the Monastery of the Franciscans, where, as the legend has it, the ghost of the White Lady wanders around.

Almost across the church there’s the square, which once was the place of gathering for all the craftsmen and merchants. Its interior and exterior outlooks have been reconstructed a bit, but currently it is used for the purpose intended – it’s where all the stores are. The rows take an island position on the square.

On the way from the church to the castle you come upon the row of brick houses, which have remained exactly the same. They are still liveable; previously they served as the accommodation for craftsmen and merchants. This housing development is an example of the traditional trading residential space in small settlements of pre-revolutionary Belarus. Not so far from this place runs River Holszanka.

Short way off the castle there’s a church that was build in 1901. It represents an example of a typical orthodox church of that time.

Before World War II the population of Holszany consisted mostly of the Jewish people; the village had its synagogue and Jewish bank, but both of them were destroyed.

In the last years they recreated once wooden (now metal) stairs, which lead to every floor of the tower. Besides its main purpose, it also functions as viewing decks. Moreover, hydro-proofing works and reconditioning for the walls, north tower, windows and doors have been done.

The festival “Holszany Castle” is an annual event. It is a cultural and historical marathon, that suggests an opportunity to listen to folk music, visit an excursion, jousting contests and stage performance and also try cuisine.