The village of Khatyn is the largest monument to the heroes of the Great Patriotic War, a real embodiment of all the pain of the war experienced. The article will tell about the tragic events associated with the village, as well as the ways to get to the village.

History of the Khatyn village

The village of Khatyn is known for its tragic fate throughout the world. True, her life ended on March 22, 1943. As one might think, the residents did not leave their homes in search of a better place, but died right in their homes.

Today, on the site of the village, there is a memorial complex Khatyn in honor of the memory of every Belarusian who died during the Great Patriotic War.

It all began during the war, when the German fascist invaders decided to take revenge on the villagers for the deaths of several soldiers and an officer of the German army. Then they came up with a plan according to which all the villagers were gathered in one shed. As soon as they entered, the barn doors closed and German soldiers threw matches, which set off flames that killed the entire village alive. The harsh soldiers of the German army called it an act of collective punishment, when civilians were killed alive in the fire by whole families. It was not only the perpetrators who died, but the neighboring families with children from six months.

The village consisted of 26 houses, in which 149 inhabitants lived. They all burned down, but the most tragic thing was the realization that there were about 70 children in the population. True, some managed to escape: two boys hid in the forest before the arson, two girls got out of the fire, two survived thanks to the desperate love of a mother who covered her child with herself, and the indiscretion of a soldier who mistook the boy for a corpse.

Of the adults, only Joseph Kaminsky survived. He almost died, but fate gave him a second chance after the enemy retreated. True, his life was no longer the same, because his only son died in the fire.

On such a note, the history of the great village, which is now known to everyone who is not indifferent, ended. In honor of the feat of the people, a memorial complex "Khatyn" was built on the site of the village. 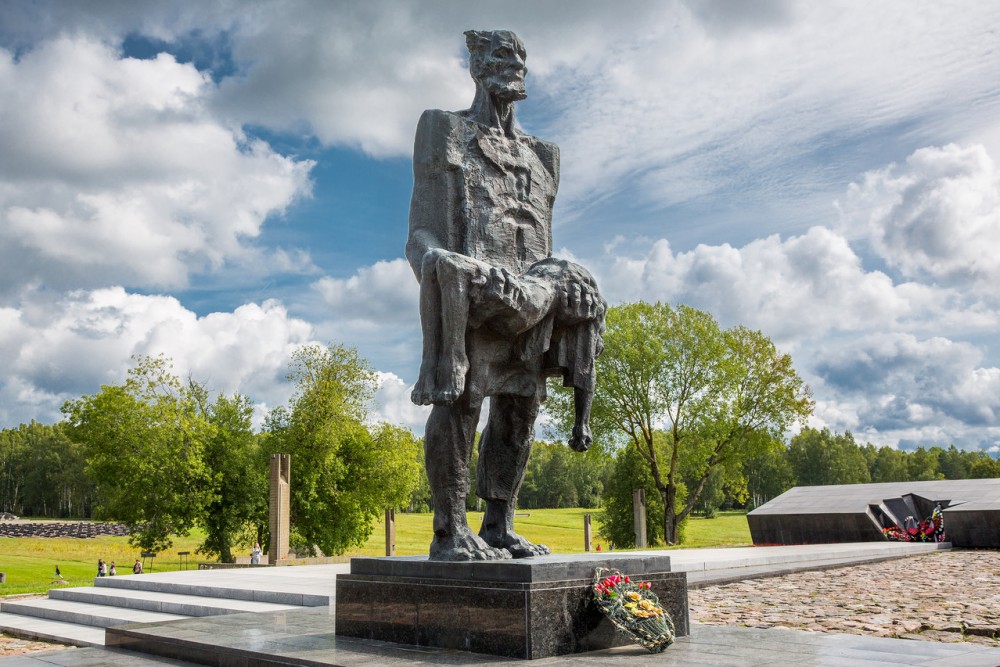 The memorial complex is a reminder to Belarusians about the events of the Second World War and the heroes who gave their lives for our freedom. The bronze six-meter sculpture "The Unconquered Man" personifies the image of Kaminsky carrying his dying son from the ashes, as well as the symbol of the entire people who have lost their loved ones and friends in a bloody battle. This is the center of the Khatyn memorial complex.

Do not forget that there were many villages like Khatyn. Some of them fought to the last, and some were burned and not rebuilt even after the victory. Their names are carved on the wall of sorrow, the cemetery of the fallen villages of Belarus.

The memorial complex is a monument to the burned down and revived villages. Two Trees of Life with their names raise their branches to the sky - this is also part of the memorial.

Tourists staying on the territory of the complex feel the atmosphere of the pain experienced by the people of that time. And on one of the stones of the memorial there is an inscription: "Good people, remember ..."

The village is located 54 km north-east of Minsk. The driver needs to head for the Logoisk district of the Minsk region, and then the road will lead you to the memorial.

If it were not for the events of those times, then this original Belarusian village would have stood on the territory of the Minsk region, and would have had more than those 26 households.

How to get to the Khatyn memorial complex?

The memorial is located 54 km from Minsk, 5 km from the Minsk-Vitebsk highway. Turning to it shows a special sign made of gray concrete blocks.

The memorial complex "Khatyn" is the most significant landmark of Belarus during the Second World War. If you are planning a trip to Khatyn, it is best for the whole day.

Among the interesting sights of Minsk and the Minsk region are also:

• Victory Square in Minsk. Today, the square is a place of tribute to the memory of the heroes who died during the Second World War. Many newlyweds observe the tradition of raising flowers to the Victory Monument to the Eternal Flame.

• Nesvizh Palace. Nesvizh castle and park with decorative lakes and shady alleys are the most beautiful palace and park ensemble of Belarus, attracting many tourists. In 2011, restoration work was carried out here, so today visitors can admire the castle in its original form.

• The National Library in Minsk is the country's sociopolitical center. It contains 9 million copies of publications and books. The unique library is located on an area of ​​10 floors, and Internet access is open for visitors. Tourists are offered excursions here with a visit to the Museum of Books and access to the observation deck of the library.

• Theaters and museums. In addition to excursion education, Minsk offers visits to entertainment venues - musical and theatrical events. You can visit the renowned National Academic Bolshoi Opera and Ballet Theater or attend the International Arts Festival.

Tourists are offered to get acquainted with the rich and original culture of our country.