Kossovsky Castle is a unique building of the 19th century, made in the neo-Gothic style and has no analogues in Belarus. Everyone who visits this complex will be amazed by its grandeur and the spirit of the Middle Ages. The Puslovsky Palace (this is its second name) is located in the town of Kossovo. It stands on a hill with a breathtaking view of the surroundings. The castle is currently under restoration. In addition, the UNESCO commission recognized the importance of the reconstruction of the historical monument. For this purpose, 50 thousand dollars were allocated for the restoration of the architectural complex. What attracts a large number of tourists to the Kossovsky castle? Let's figure it out together.

The history of the Puslovsky palace

Many trials fell to the lot of the Kossovsky castle, which left an imprint on the fate and appearance of the structure. The history of this complex dates back to 1821, when Kazimir Puslovsky acquired the estate. He founded a carpet factory here, and in 1830 initiated the construction of the castle. After his death, the palace became the property of his son, Vandalin Puslovsky. It was in 1838 that the construction of a magnificent palace began. The famous architect František Jaszczold became the initiator of the project, then Vladislav Markoni continued the construction of the Kossovsky castle. It is considered unique in its way, as it combines interesting architectural solutions of both external facades and internal decoration. It is known that very often famous personalities such as Napoleon Orda, Henryk Sienkiewicz, Jozef Pilsudski and others visited the palace. The next owner, Leonard Puslovskiy, sold the mansion for 700 thousand rubles to pay off the card debt. After that, the castle was resold several times and had several new owners. During the First World War, the castle was destroyed and plundered. Many valuables, such as paintings, manuscripts, statues, were exported abroad. From 1921 to 1939 the palace belonged to Poland, where it was used as a building for a beekeeping school. On the territory of the Kossovo castle there was a huge park and a greenhouse, where rare plants and trees were collected. Unfortunately, all this was also destroyed and has not survived to this day. From 1939 to 1941, units of the Red Army were located in the castle. During the Second World War, the castle suffered enormous damage due to a fire that was started by local partisans. This resulted in both internal and external damage to the building. The foundation was damaged, the walls were destroyed. This was done in order to prevent German soldiers from using it as a hospital and a radical decision was made to burn the castle to the ground. In 1947, the Kossovo regional executive committee tried to adapt the castle to an orphanage, but this idea was unsuccessful. 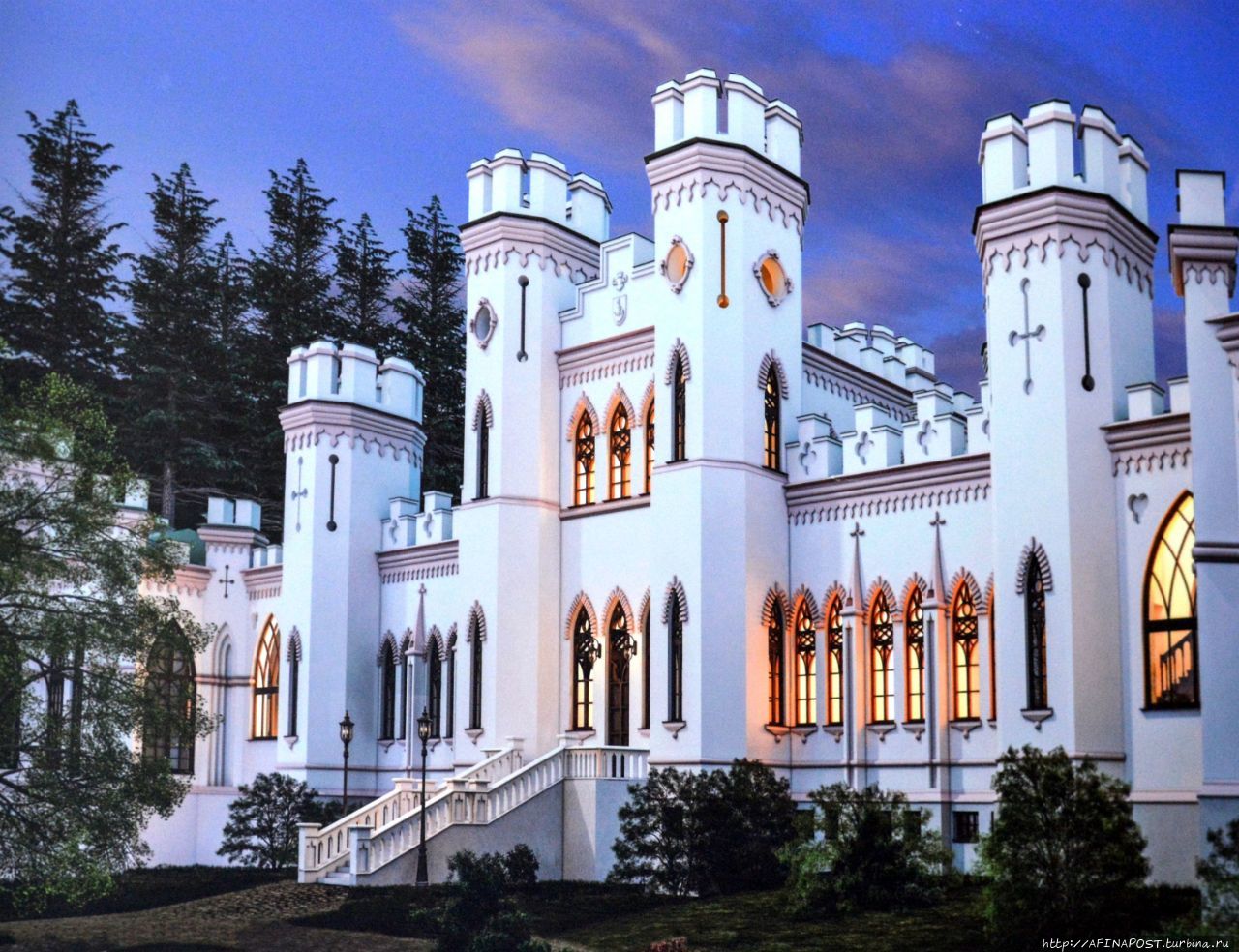 Architecture and surroundings of the Puslovsky palace

The construction of the Puslovskys' palace took about 10 years. The castle was erected on an artificial hill in the neo-Gothic style, which gives it an even more majestic appearance. The building consists of a two-storey building and two side wings, over which 12 towers rise. Each tower symbolized a month of the year. The central 4 towers symbolize the most productive months - May, June, July, August. Unfortunately, no reliable information about the interior decoration has been preserved. The palace had at least 130 rooms and each room was made in an individual style and in a different color scheme. The palace was also surrounded by a huge park complex, where the rarest and most unique plants and trees were collected. Not far from Kossovo there is a beautiful architectural monument of Belarus - Ruzhany Castle. Also in the vicinity of Kossovo there is a museum-estate of Tadeusz Kosciuszko, which was restored in 2004 and attracts a huge number of tourists.

Legends and myths of the Kossovo castle

The history of the castle is always shrouded in various legends and myths, and the Kossovo castle isn’t an exception. There are several legends. One of them says that the owners used a lion to defend the palace and released it at night along the corridors to protect their possessions. There is also a legend that the castle had a wide underground passage through which you can get to the Sapieha residence, located 20 kilometers from Kossovo. And the passage is so wide that it could be done on a horse-drawn carriage. And also the legend about the musical peculiarity of the palace. If a person claps his hands while standing under a window on the second floor, then melodic sounds are heard from the east side. 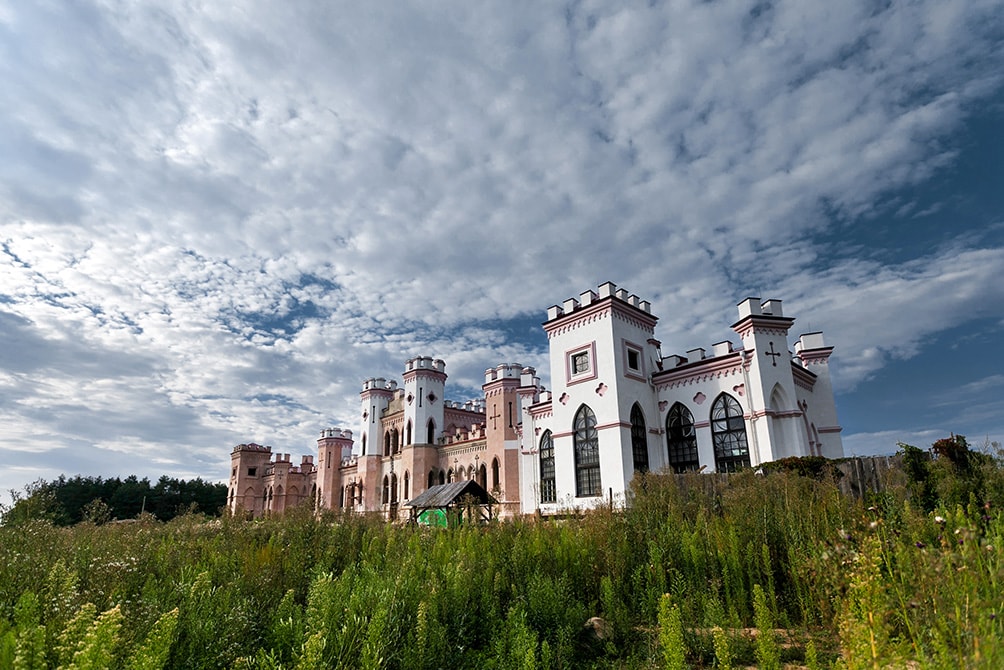 Information for visitors to the Kossovo castle

The Kossovsky castle is located in the Ivatsevichi district of the Brest region in Belarus. After opening in November 2017, the Kossovsky Castle is working according to the schedule of the Tadeusz Kosciuszko Museum.

Ticket price: for adults - 3 rubles, the cost of preferential, student and school tickets - 2 rubles. Children under 7 years old are free.

It isn’t possible to order an excursion, so the castle is still open only for independent visits. Excursions are conducted in organized tourist groups.

How to get to Kossovsky castle

The distance between Minsk and Kossovsky castle is 220 km, so you can find several options how to get to the palace. The most comfortable is the car. You need to follow the M1 highway to Kossovo, go through the village and then follow the signs to reach the castle. There is a parking place and it is free. If suddenly you do not have your own car, do not despair, as an exciting journey by public transport awaits you too. You can get to Ivatsevichi by bus or train, and then change to a suburban bus to Kossovo.