Mir Castle is one of the most important sights of our country. The castle is inscribed on the UNESCO World Heritage List. After all, the successful combination of the architectural styles of Gothic, Baroque and Renaissance makes Mir Castle one of the most impressive castles in Europe. Today we will tell you why it remains the most favorite place of tourists and how to get to it.

Mir Castle is an outstanding example of defense architecture of the 16th century. It is located in the village of Mir in the Grodno region of Belarus.

The earliest structures are in the Gothic style and date back to the 16th century. This Belarusian castle was founded at the beginning of the 16th century by Prince Ilinich.

In 1568, the castle passed into the possession of Nikolai Radziwill, who completed it in the Renaissance style.

A three-story palace was erected along the eastern and northern walls of the castle. Earthen ramparts with bastions at the corners and a moat with water were built around. In the northern part there is an Italian-style garden.

During the Napoleonic Wars, the castle was seriously damaged and was abandoned for over a century.

It was rebuilt in the early 19th century still in the hands of the wealthy Radziwill family and sold to Nikolai Svyatopolk-Mirsky in 1895. His son began the restoration of the castle, which took place under the direction of the architect Theodor Burchet.

After the war, those local residents lived in the castle, whose houses were destroyed during the war. Then a military garrison was located here. 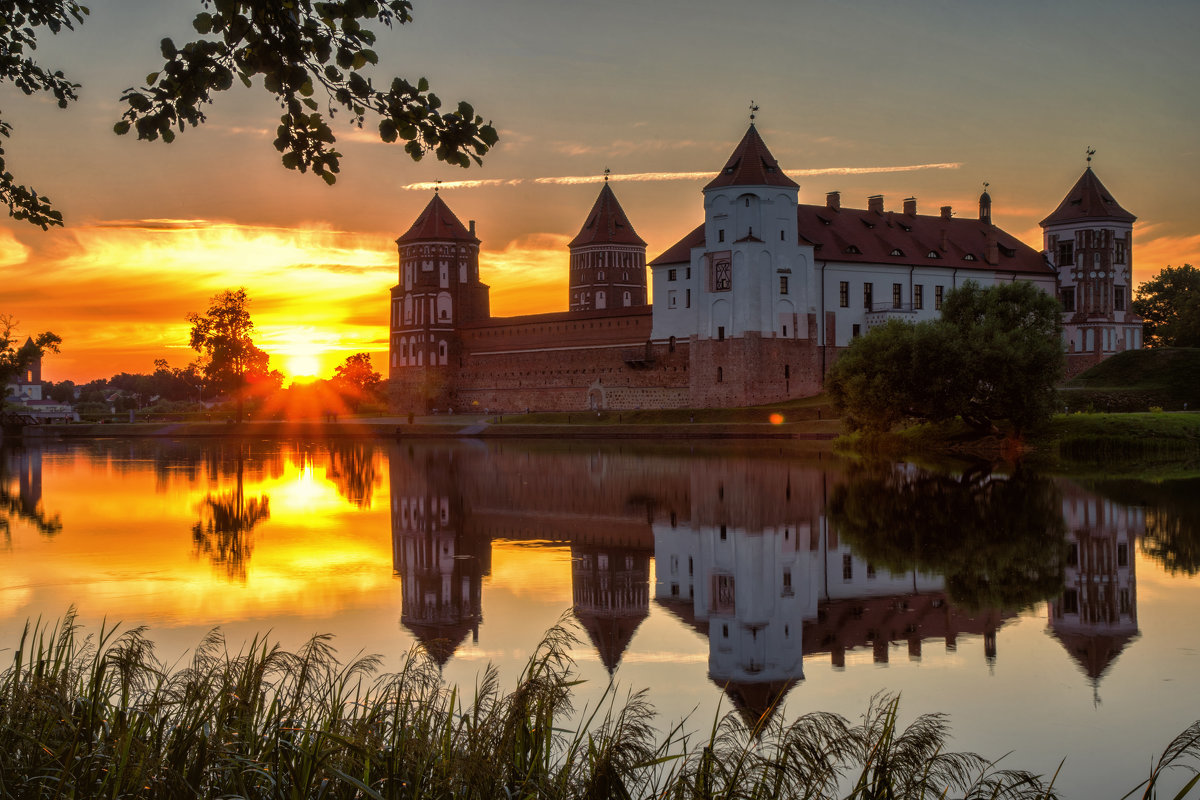 There have always been legends around the castle, the most famous of which is the legend of the apple orchard.

Today there is a picturesque man-made lake near the castle. But once there was a beautiful apple orchard there. Prince Nikolai Svyatopolk-Mirsky - the owner of the estate in Mir, ordered to dig up the lake and cut down the garden.

It was spring, the trees were blooming magnificently, according to popular belief, it is a great sin to cut flowering trees, there will be misfortune and a curse, and the peasants refused to cut the garden. The prince did not want to waste time on folk omens, and he hired newcomers to cut the garden.

When the lake was dug, not a day passed without misfortune, many people died, the son of a local witch, a young guy, also died at a construction site. According to legend, this guy's mother cursed the lake, and her parting word were the following “Let this lake take as many souls as the trees bloomed in the garden,”.

This is how the legend of the apple orchard was born.

The architectural style of the Mir Castle

The Mir castle was built of stone and brick; many building materials have an author's mark. The layout of the castle refers to a quadrangle close to a square. The castle was primarily assigned the function of defense against enemy raids, so its massive walls had several loopholes, and the towers were designed for shooting. On the territory of the castle there was even such a unique specimen as a special device for raising weapons to the upper floors. There were four protruding towers at the corners of the castle, and the fifth was used to enter and view the surrounding area.

The structure of the Mir Castle

The castle has a square shape with a length of 75 meters. At each corner there are 5-storey towers 25-27 meters high. The bram tower has 6 floors. The height of the walls reaches 10-12 meters. Their thickness varies depending on the height. At the bottom, it reaches 3 meters, and at the very top it can be less than 2 meters.

The walls and towers are lined with the technique of three-layer mixed brick and stone masonry. In the lower part of the walls, rifle loopholes are cut. And the western and northern walls of the castle from the side of the courtyard were equipped with battle galleries. 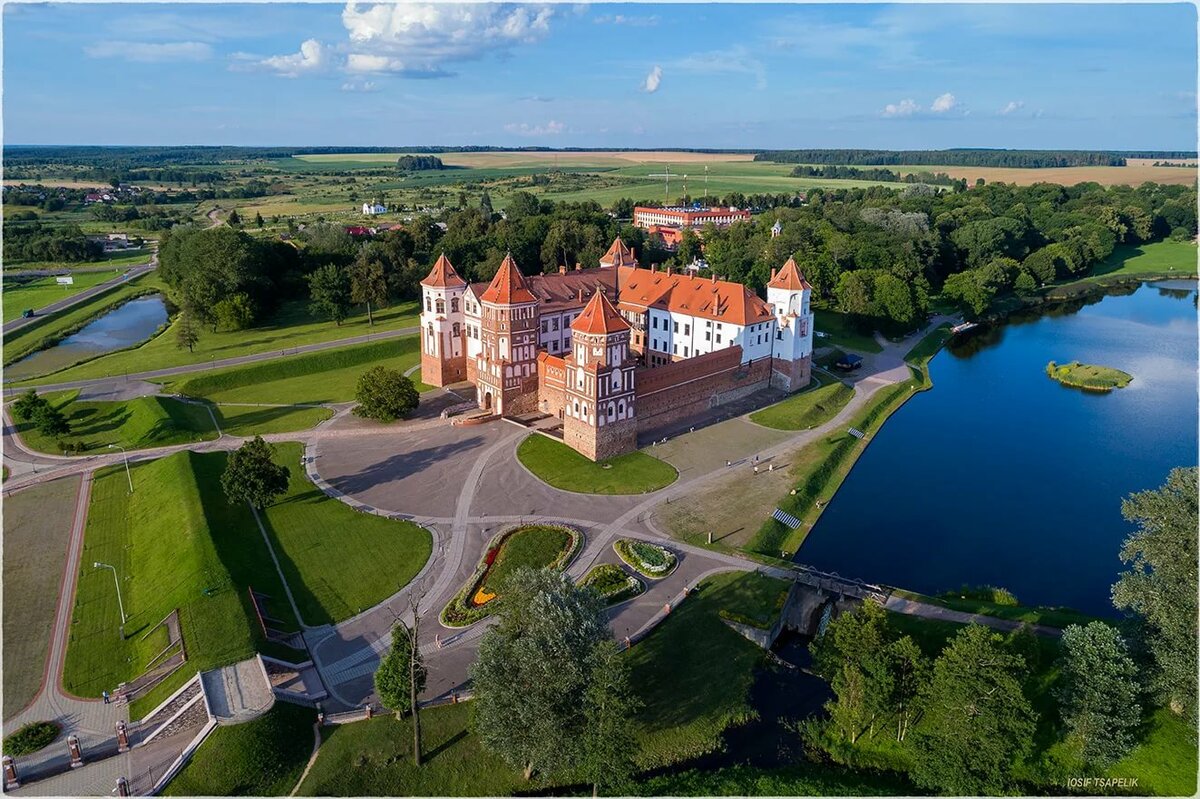 Restoration work in the palace began only in the eighties, and after a while the Mir Castle was transferred to the State Art Museum of Belarus, after which a project for the restoration of the palace complex was approved. Despite the fact that the first exhibition took place in the early nineties in the south-western tower, the official opening of the Mir Castle complex took place only in 2010.

Currently, the area of the Mir Castle is about 25 hectares, and the museum located in it has a well-developed infrastructure. Here you can not only go on excursions and see with your own eyes how representatives of one of the most famous aristocratic families lived, but also hold weddings, conferences, visit a restaurant, watch knightly tournaments and theatrical performances. On the territory of the complex there is the only hotel in the castle in Belarus, designed for 15 rooms.

Excursions to the Mir Castle

You can see a real knight's castle, plunge into the atmosphere of the Middle Ages, learn a lot of interesting historical facts about the owners-feudal lords and their descendants, while it is interesting and positive to spend time on an excursion to Mir Castle.

On March 29, an exhibition of historical maps “Uniting space and time: Belarusian lands on maps of the 16th – 18th centuries” finished its work in the museum. On it one could see historical maps and their copies, as well as objects related to the journey. If tourists did not manage to get to the exhibition, they were invited to view a virtual tour of it.

Those wishing to see the Mir Castle should take into account that the museum is open from 10 am to 6 pm, and the last Tuesday of the month is a day off. There is an opportunity to visit the castle complex free of charge - it is provided every last Monday of the month.

You can also get from Minsk to the castle by car - in this case, you need to go along the M1 motorway in the direction of Brest and, bypassing Stolbtsy, start looking out the sign to the village of Mir (the road from the Minsk-Brest highway to the village will take about 15 minutes).

Everything here breathes history and antiquity, as if you were in the Middle Ages. The walls of the castle witnessed chic receptions and knightly tournaments, palace intrigues and family dramas.

The hotel combines the unique luxury of interiors and modern comfort.

For guests there are 15 rooms with a total capacity of 29 people, decorated in a unique design style.