Time for mushroom pickers start in mid-summer. Belarus is rich in different types of mushrooms, so pickers from all cities come to the forests to collect delicacies. Some mushroom pickers have already been able to harvest thie lovely food, and some even managed to earn extra money on it. Today we will tell you about the most popular picking places and all about those mushrooms that can be safely collected in a basket.

Mushroom-picking enthusiasts have been active since July. In the most successful baskets you can find chanterelle, boletus and more. When does the season start?

It all depends on the species you are hunting. For example, you can go for russula from July. In general, it is still too early to collect, but if enough precipitation has passed, then you can safely go in search of boletus,aspen mushrooms and mushed mushrooms.

Starting from August, you can open the mushroom season, because August is the most successful month for mushroom pickers. This is facilitated by weather conditions: the heat is already beginning to subside, night fogs are more and more often observed, and dew is becoming more abundant. At this time, mushroom pickers are looking for boletus in the forests. You can also find autumn mushrooms and Polish mushrooms. Ryzhiki are those mushrooms that will become a present for picker who goes to the forest in August.

September and October still delight in the presence of mushrooms, but finding them will be increasingly difficult. As a rule, at this time you can find russula, kozlyaki and zelenushki.

In general, each month is rich in mushrooms. But there is a special time for a certain mushroom. Therefore, if you have any preferences, it is better to look at the month in advance. 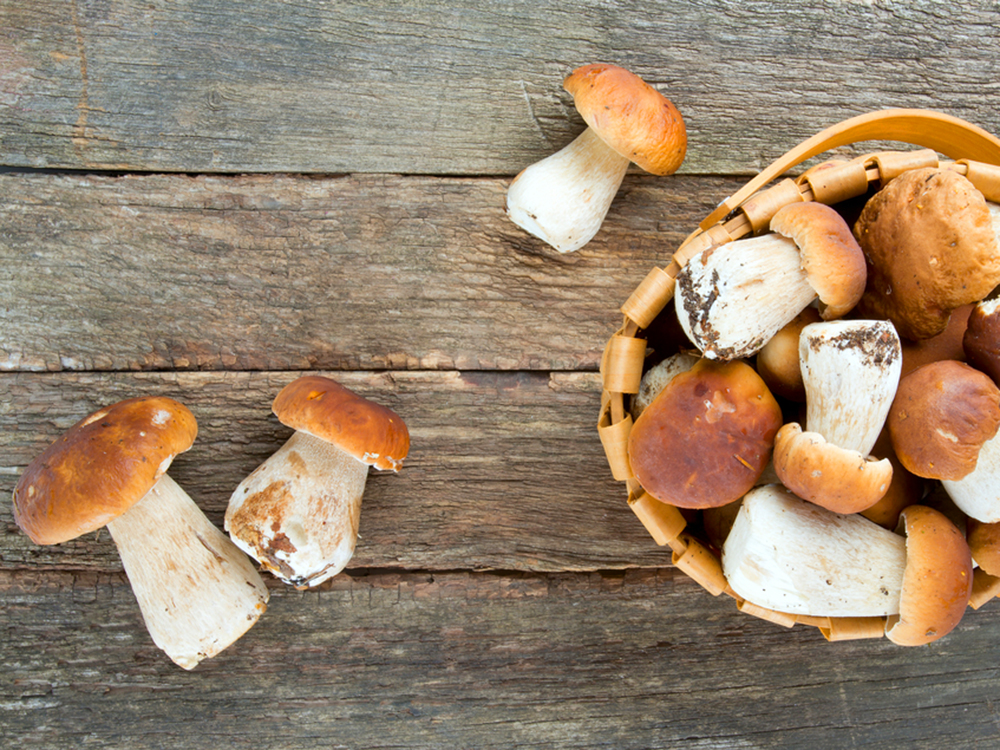 Types of edible mushrooms in Belarus

It is often in the fall that Belarusians begin to pick mushrooms. In our country, there are more than 250 thousand species of mushrooms. But remember that not all of them are edible. Mushrooms that can be eaten are rich in protein and minerals, and inedible mushrooms are very dangerous to health. Mushroom pickers who annually go on such a hunt will not be difficult to distinguish one mushroom from another, but for beginners it is better to play it safe and study the list of edible and inedible ones. In any case, when they have collected, inform the older comrades so that they check before eating. Since at first it is quite difficult to distinguish an inedible mushroom. In addition, most edible mushrooms have false counterparts.

The edible mushrooms you should have in your basket:

•White mushroom. The most delicious are white mushrooms found in spruce and birch forests.

According to statistics, mushrooms are the most common cause of food poisoning in Belarus. Some experience this as a lesson for the future, but not everyone will spare such ailment. Therefore, you need to be extremely vigilant when picking mushrooms, especially if you are a beginner.

Mushrooms that should never end up in your basket:

• Let's start with the well-known fly agaric. His fault is about 15% of cases of poisoning each season. And it seems that we are taught from childhood not to pick this red mushroom, but still inexperienced mushroom pickers have not learned to bypass it;

•Death cap. Some people confuse a mushroom with russula or even mushrooms, not realizing the full danger of this species. More than 50% of toadstools are fatal!

• Strochki were not always considered to be clearly poisonous mushrooms. But lately, the number of deplorable cases of eating such mushrooms has become terrifying, so in no case take up these mushrooms;

• False honey fungus. The deplorable consequences of this mushroom are few, but still we do not advise taking risks;

• Svinushka once did not pose a particular danger to humans, but today these mushrooms cannot be harvested. The incubation period for svinushka poisoning is from 2-3 to 6-8 hours.

The first signs of mushroom poisoning are nausea, vomiting, severe abdominal pain, fever, weak pulse, or hypothermia of the extremities. Call the doctor immediately if you experience these symptoms. Stay in bed, take activated charcoal, and drink as much water as possible.

It is forbidden to walk into the forests in the Minsk region in three districts: Vileika, Molodechno and Stolbtsov. In the Grodno region, those who like to pick mushrooms and berries cannot engage in these trades in forests in five regions: Oshmyanskiy, Lida, Shchuchinskiy, Grodno and Volkovysk. In the Gomel region, restrictions are in effect in four districts: Rechitsa, Dobrush, Bragin and Gomel.

There are no collection restrictions in the other regions.

If you have a car, it is better to take long-distance routes. It is believed that the further you go, the more mushrooms you collect.

If you have no desire or time to go far, then go to the Khatyn forest. This place near Minsk is rightfully considered the most filled with mushrooms. Continuous huge forest between Logoisk, Pleschenitsy and Zembin stretches for many tens of kilometers. The forests are happy to please mushroom pickers with a variety of types of mushrooms, the main thing is to review all edible options first.

If you have a personal car, then go to Vitebsk direction along the highway. It is not difficult to find mushroom spots along this road, it is can be seen even hundred meters. But if you are here for the first time, we advise you to drive to Molodi, Mostishche or Aleshniki.

If you do not have your own personal transport, then use the public one. Trust that you will not regret the bus ride at all once you see the variety of mushrooms present in these places.

Where can you buy mushrooms?

In autumn, people don't complain about the lack of mushrooms, because everyone can buy them where he wants. Mushroom pickers start selling tasty finds right on the track, so it is not uncommon to meet a mushroom picker with several buckets at such a time.

A large batch can be sold on the market. In Minsk, you should take a ride to Komarovsky market, which is located at st. Vera Horuzhei, 8. In addition to mushrooms, berries, vegetables, fruits and other products grown on agricultural plots are sold here during the season.

With the development of the Internet, you can buy groceries not only in stores. For example, some mushroom pickers sell their catch on websites for example Kufar and Flagma. Such sellers offer their prices, and you will definitely buy fresh goods from them, which have recently been growing in the forest.