The Belarusian land is rich in interesting places and architectural monuments. That annually attracts thousands of foreign tourists and locals to our country. One of the most popular and beloved historical and cultural values of Belarus is St. Sophia Cathedral in the city of Polotsk.

This is the oldest stone building on the territory of Belarus, which was first mentioned in chronicles in the 11th century. Today this building is multifunctional: first of all, it is an Orthodox church, which combines a museum and a concert hall, since there is a magnificent organ in sound and beauty. More than 300 concerts of organ and chamber music are held annually in the concert hall of St. Sophia Cathedral.

Since this shrine is in great demand among foreign and Russian-speaking tourists, an audio guide in Belarusian, Russian and English, as well as a guidebook with a plan of the cathedral and a map of Polotsk, has been developed for independent visits to the museum. Also, many newlyweds from Polotsk and its environs strive to visit the shrine every year, not only to get magnificent photographs against the background of the beautiful architecture of the cathedral, but also to join the spiritual component of the temple, illuminating their marriage for a long and happy life together.

At the Museum of Architecture of St. Sophia Cathedral, friendly staff are waiting for you, who are ready to share their knowledge and tell about the history of the architecture of the most ancient stone building on the territory of modern Belarus, about numerous rebuilding’s, repairs and the last restoration of the monument. The concert hall in St. Sophia Cathedral was opened in 1983 and has a capacity of 304 seats. The Concert Hall annually hosts the International Festival of Early and Contemporary Chamber Music (April) and the International Festival of Organ Music. Traditionally, organ concerts are held on Sundays performed by the concert hall soloist, laureate of an international competition, Honored Artist of the Republic of Belarus Ksenia Pogoreloi.

The architecture of St. Sophia Cathedral

The architectural style of the temple can be described as late Baroque. The architecture of St. Sophia Cathedral is a model of urban planning in Ancient Rus. In total, there are 12 temples of St. Sophia in the modern world. The buildings of the same name in Kiev and Novogrudok are closest in external resemblance to the temple in Polotsk; we can observe their similarity in such architectural elements as the cross-domed vault, characteristic of Christian churches of Byzantium, as well as a gallery and 5 naves. Also, St. Sophia Cathedral has a lot of unique construction features that you will not find in any other similar temple in the world. The so-called «vima» - an altar elevation appeared in its interior. The temple itself is seven-domed, which in Christianity symbolizes the seven Sacraments of the Church, seven Ecumenical Councils, and seven virtues. Particularly notable is the stone altar partition, which resembles the altars of Catholic churches. The Polotsk temple has a basilica, as well as two symmetrical towers that rise 50 meters above the Zapadnaya Dvina river. The rich white interior of the sanctuary is decorated with gold, stucco and ornamental cornices, arches and majestic columns, and the walls are painted with holy images of the New Testament Trinity and the Savior Not Made by Hands, as well as a copy of the famous fresco by Leonardo da Vinci «The Last Supper». The southern facade of the building amazes with its unusual structure - its towers are located so that they create a strong optical perspective. And at the beginning of the 20th century, the holy images depicted on the walls of the shrine were restored. Unfortunately, the name of the architect who restored the temple has not survived to this day. 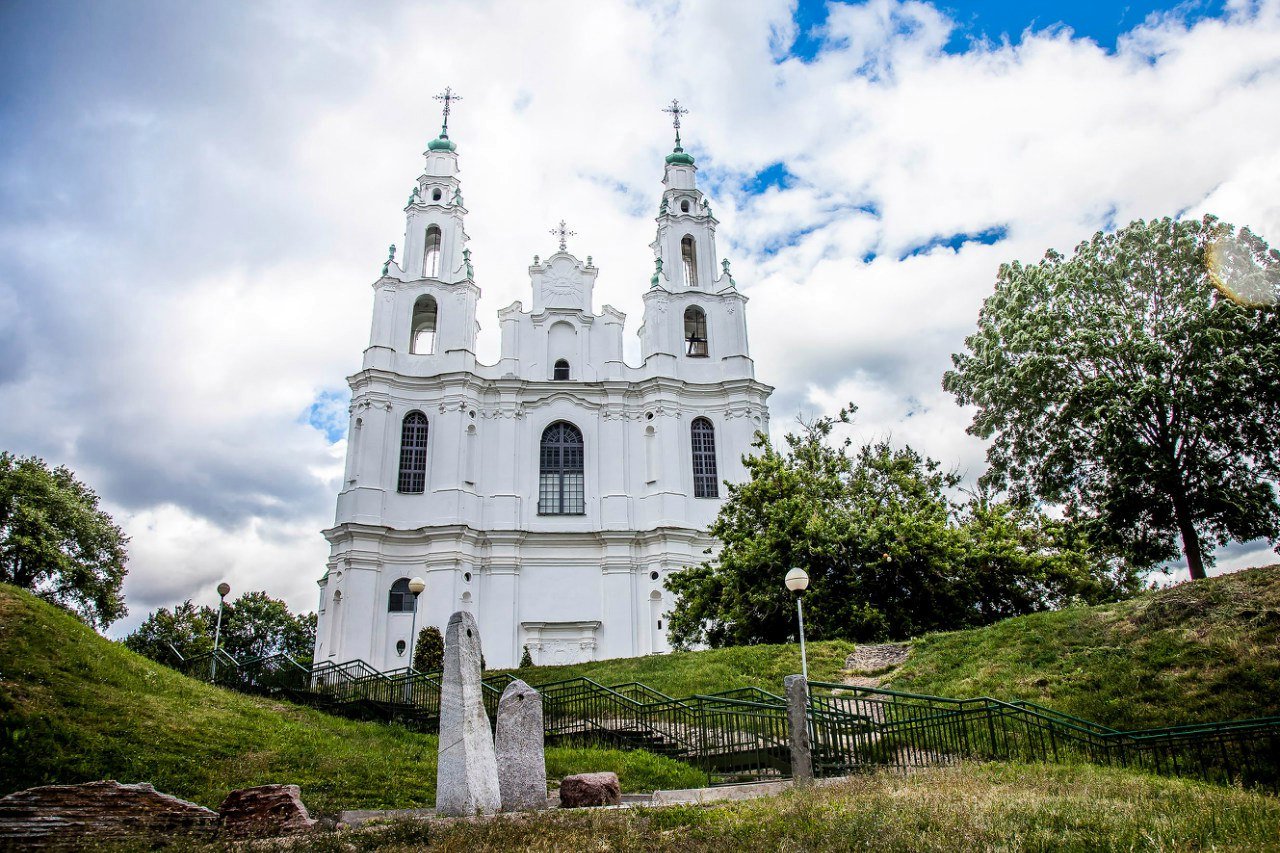 St. Sophia Cathedral is the oldest stone building on the territory of Belarus, it was originally used as a fortress, served as the embodiment of power and statehood. Here they received ambassadors, decided the fates of different countries and protected religious shrines. Then, over time, St. Sophia Cathedral of Polotsk became a cultural and religious center; it housed libraries, archives, treasury, kept religious shrines, and housed the prince's tomb. During the times of the Grand Duchy of Lithuania, this cathedral was the only Orthodox Church in the city. During the Northern War, an ammunition warehouse was placed in the cathedral, by order of Peter. According to one version, Tsar Peter demanded the keys to the «royal gates» from the ministers. And when they refused, he killed the abbot and four monks in anger. After that, Peter wanted to transfer the church to the Orthodox, but they refused, fearing revenge from the Uniates. Then it was decided to use the cathedral as a warehouse. Alas, the explosion of this warehouse became fatal for the old building. Today only the masonry, foundations and frescoes remain of the original building. In the seventeenth century, the building of the Polotsk Cathedral was rebuilt. The cathedral houses the famous bas-relief composition «The Trinity of the New Testament», made in the Rococo style.

The exact address of the cathedral: Belarus, Vitebsk region, the city of Polotsk, st. Zamkovaya, 1. It is located on the picturesque bank of the Western Dvina, its towers rise 50 meters above the river level. Services are held here, guided tours and organ music concerts are held. There are more than 300 concerts a year take place here. 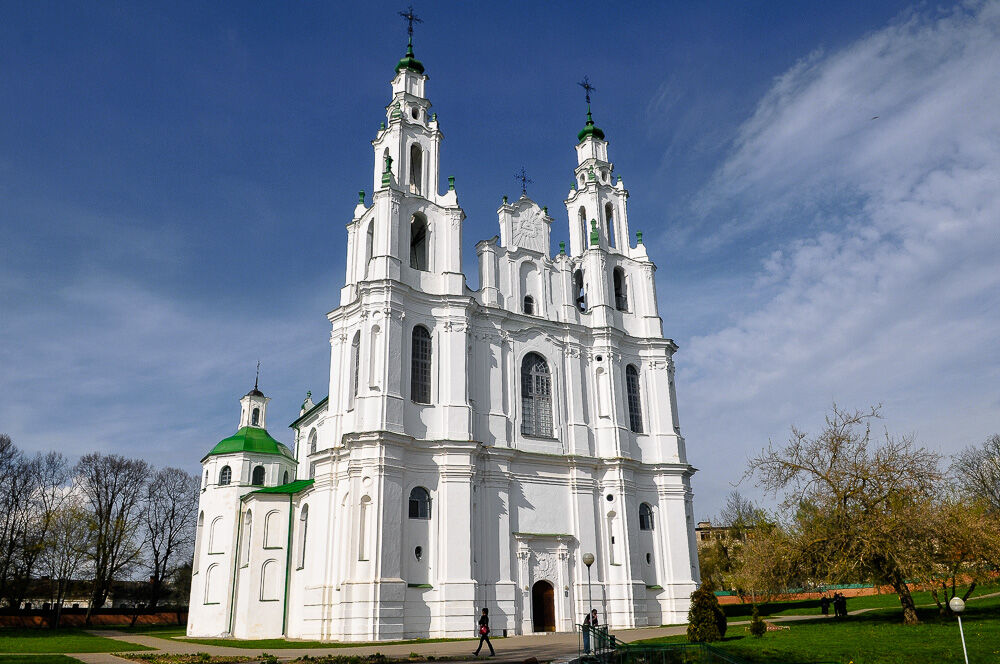 How to get to St. Sophia Cathedral in Polotsk

Direct minibuses and buses go from Misk to Polotsk every day, you can also rent a car and come here on your own, and in this case the journey will take 3.5 hours, which is about 350 km. You can drive through the city of Lepel or the village of Glubokoe, the difference will be about 80 km. Also, every day from Minsk, 4 times a day, a train leaves, on which you can comfortably get to Polotsk. The duration of such a trip varies from 3.5 to 6.5 hours, depending on the number of stops and the direction of the route. There are many hotels and hostels in the city, you can also rent an apartment for a day, which will cost you, respectively, from 20 to 80 rubles. There are also many mini-hotels that will offer comfortable living conditions and additional opportunities for recreation.

In the vicinity of St. Sophia Cathedral, you can also see some sights:

• Borisov stone of the XII century. Located at the entrance to the temple, the Borisov stone is a boulder on which images of crosses and ancient letters were applied. In total, there are only 4 such religious monuments-boulders on the territory of Belarus.

• Transfiguration Church. Built in the middle of the 12th century, the temple has been perfectly preserved to this day. The church is a historical and cultural value and is included in the UNESCO World Heritage List.