The Ruzhany Palace is the country-famous residence of the most influential Sapega dynasty. The article will tell about its history, location and objects of tourist display.

The history of Sapega palace

The history of the castle begins more than four hundred years ago, as soon as the well-known at that time Lev Sapega, an influential man of the times of the Grand Duchy of Lithuania, thought about the construction of the castle. The palace was supposed to perform defensive functions, therefore, initially three massive tetrahedral towers towered over the palace.

After about a hundred years, the palace was completely transformed, and then it gained the greatest popularity. Powerful rulers used the building as a meeting place for dealing with matters of high importance to the ON. The palace was often visited by high-ranking officials, including kings. Spacious cellars were set aside for the state treasury of the Grand Duchy of Lithuania and the military arsenal, there were many documents of state importance, as well as the archive of the Sapega family itself. There was also room for countless food and wine supplies.

Throughout its history, the palace has experienced plunder more than once, but it was stubbornly rebuilt again and again. After the defeat of the 1831 uprising, the Sapega left the residence, within the walls of which a weaving factory was organized.

The architecture of Sapega palace

Approximately one hundred years after the construction it was impossible to recognize, because it was completely rebuilt and its style and appearance were changed. The architect Jan Samuel Becker, who undertook the reconstruction of the building, supplemented the baroque style with inserts of classicism. The cruciform objects were changed to rectangular ones, which served as a union with the side buildings through an arcade.

In addition to the architecture of the palace itself, special attention should be paid to the theater. At that time, it was the largest in Europe. Events for high-ranking people were often held here, and the stage was occupied by a troupe of 60 actors and 40 musicians!

The palace keeps a centuries-old history filled with interesting events and defeats.

2. At the end of the 17th century, the palace was plundered, but already in the 1770s the residence was rebuilt again.

3. After 1831 and until the twentieth century, a weaving factory was located in the chambers of the palace. 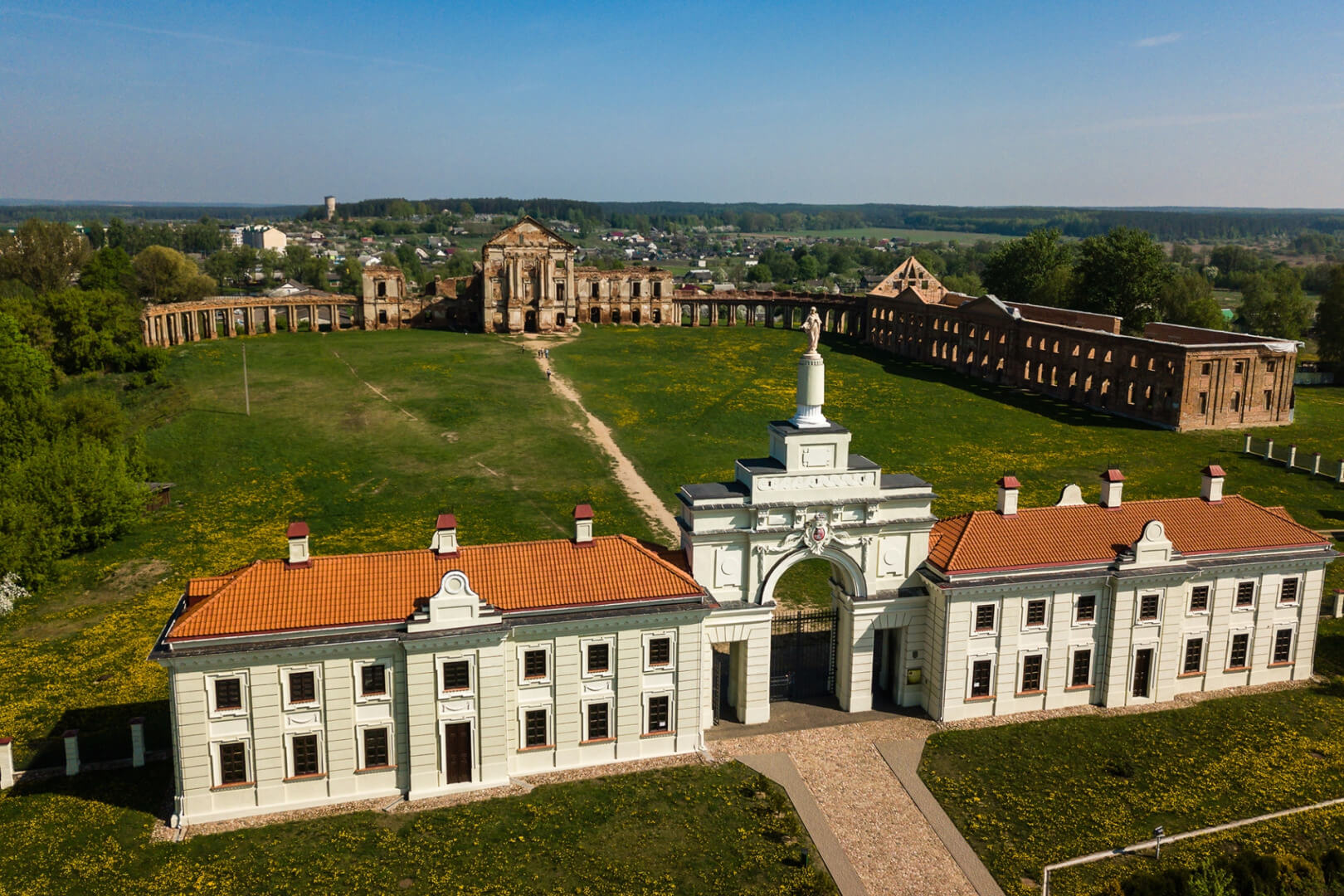 The palace complex is located in the village of Ruzhany, in the southwestern part of Belarus. The palace stands almost at the intersection of the Grodno and Brest regions.

How to get to Sapega palace?

Public transport will not take you to the Palace, so it will be easier to get there by car. If you follow from Minsk, most of the way will go along the M1 motorway. In Ivatsevichi, you need to turn onto the P44 highway, which leads to Ruzhany.

You can also come by bus (the journey from Minsk to Ruzhany will take about 4 hours) or by train (to Ivatsevichi).

There is not a large selection of hotels nearby, so it will be more convenient to come here for a day. If you are tired after a long journey, we recommend staying at the Ruzhansky Hotel. Hotel address: Pruzhany district, g. Ruzhany

In the center of Ruzhany there is a wooden stone Trinity Church. In the 18th century, 2 more symmetrical chapels were built here - the Holy Cross and St. Barbara, which were later reconstructed several times. The last reconstruction was completed in 2003 with the support of Maria Sapega and the Ministry of Culture of Poland, as stated by a memorial sign on the entrance. Connoisseurs of architectural solutions will notice a combination of baroque and classicism features in the church. It is interesting that many items of the church have been preserved since ancient times in their original form. It is surprising that the church celebrates its 400th anniversary.

On the opposite side of the church, you can see the Peter and Paul Church. If Father Alexander is in the church, you will be lucky to hear an amazing story firsthand. In 1895, the town was engulfed in a violent fire, which completely burned down the entire area. To the great surprise of the residents, the fire bypassed only the temple, in which the windows only burst from the high temperature. Local residents associate this story with the healing properties of the Ruzhany icon of the 17th century, which became the reason for the salvation of the temple.

There is a park not far from the church, where you can see unique wooden sculptures. They depict Lev Sapega himself, and his son Casimir, also the Polish king Vladislav IV Vasa with his wife, and the Polish queen Bona Sforza. Talented craftsmen carved wooden sculptures of cultural figures and political figures that influenced the history of the country.

The final stop in Ruzhany in the summer will be Papernya Lake with a coastline 12 km away. The name of the lake is associated with the founding of a paper factory. Untouched nature with swans on the shore attracts lovers of secluded relaxation, for this reason the local sanatorium has become a favorite place for vacationers.