&nbspHome / &nbspTravel blog and reviews   / Sights of the Gomel region

Sights of the Gomel region

Traveling in Belarus, everyone starts from Minsk. And this is not surprising, because our capital surprises many tourists with its purity and beauty of nature. But our country is not limited only to this city, we have at least 6 regional centers that are happy to meet you and introduce you to Belarusian culture. Today we will meet one of them, and it will be Gomel. The best tourist places and routes of the Gomel region in a brief description.

Let's start your route in the Gomel region with the Rumyantsev-Paskevich Palace. The central part of the palace is considered an architectural monument of the late XVIII century. The life of its inhabitants, statesmen and military figures of the Rumyantsevs and Paskevichs is closely connected with the history of the palace. In the XIX-beg. XX century the rooms of the first floor of the central part of the palace in the life of the owners played the role of ceremonial rooms, where receptions were held, ceremonies were held. The architecture and exterior decoration of the premises corresponded to their status. Throughout the history of the palace, it was destroyed and rebuilt many times.

Today in the tower you can find the museum exhibition "The owners of the Gomel estate Rumyantsev and Paskevich." Authentic exhibits (paintings, sculpture, art bronze, weapons, personal items) that show the history of Gomel have been preserved in the tower. 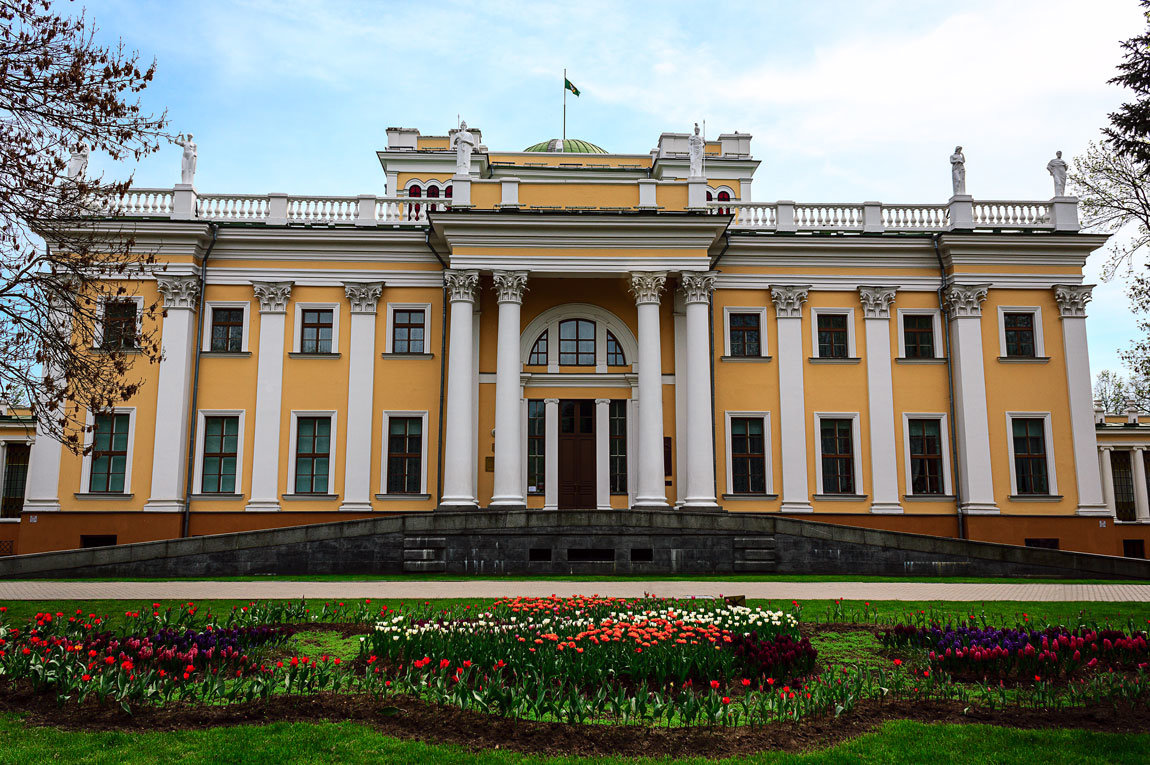 Cathedral of Saints Peter and Paul

Here in the beautiful park of Gomel you can walk to the Cathedral of Saints Peter and Paul. Most importantly, it was built on the banks of the Sozh River, so you will definitely notice it. The Cathedral of Saints Peter and Paul is popular with guests, tourists and residents of the city of Gomel. This temple is a real decoration of Gomel Park. About a hundred people visit the temple daily. They say that those who come there with a bad mood, sorrows and problems, leave there calm and peaceful. Arriving in Gomel, we recommend to visit this amazing place without fail to get acquainted with its architecture, history, and plunge into the world of inspiration and tranquility.

Going a little further, in the same palace and park ensemble you will see the chapel-tomb of the princes Paskevich. The remains of 8 members of the princely family lie in it. And it seems like the place of grief should be strict and reserved-faded, but this is not the case. The chapel is a fusion of decorative, applied and architectural art, a unique structure. This chapel is wanted to put it in a casket on soft velvet.

You should definitely call in the art gallery of Gabriel Vashchenko. The artist’s works were fundamental in Belarusian art in the mid-20th - early 21st centuries. The author of the gallery Gavriil Vashchenko was born in Polesie, so there was no need to look for inspiration: a large number of his works are devoted to the nature of Belarus (“First Snow”, “Polesskaya Song”, “Green Meadow”, etc.).

To see the story, drive to the city of Turov, because here you do not need to look for temples. Do not be too lazy to go to a modest old Orthodox church in the city center. All Saints with the official name - Church of All Saints. This means that it was consecrated in the name of all the saints, named and not mentioned anywhere by name.

The church was erected in the years 1801-1810 by Archpriest Anthony Loiko. Now it is officially recognized as a monument of folk architecture.

The stone crosses is well-known in Belarus, but the Turovsky crosses, which are located not only in Turov, but also in its environs, are considered the oldest and historically important. According to legend, immediately after the baptism of Rus, these crosses fell into Turov along the Dnieper and Pripyat rivers from Kiev (sailing against the stream). When people saw them and dragged them ashore, "the water turned into blood." If we recall how Christianity took root in our lands, it becomes clear why "water turned into blood."

On the territory of the Mozyr castle, go to the museum of local lore. On the ground floor you will find the hall of military glory of internationalist warriors, where you will see equipment, personal items of soldiers who fought in Afghanistan, fragments of their letters and much more. On the second floor - the nature hall, which contains stuffed animals living in the Belarusian Polesie, as well as the archeology hall - here you can get acquainted with the evidence of the “hoary antiquity” of Mozyrschyna.

The complex hosts various celebrations. On New Year's Eve, two Santa Clauses are greeted by children and adults at Mozyr Castle. Mozyryans were fond of the recently traditional “Museum Nights”, which take place at the end of May.

Everyone knows from school that in this village were the oldest human settlements dating back 26 thousand years BC. During archaeological excavations in this area were found the remains of a medieval city.

Throughout the entire period of existence, the Yurovichs passed “from one hand to another,” changing the names of the territories to which this settlement belonged. However, this did not prevent the preservation of the village and its heritage to this day.

The history of the creation of the monastery in Yurovichy dates back to the Jesuits, and in particular to the activities of Martin Turovsky, who preached for more than 10 years in Volyn and Polesie, carrying a miraculous icon of the Mother of God.

In the 17th century, he built a chapel for the shrine on Yurovichskaya Hill. According to legend, Mother of god chose this place. So in 1673 the Yurovichsky monastery was founded. Since then, the icon has done many miracles and has become known as the Yurovich Icon of the Mother of God.

Gatovsky Manor in the village of Krasny Bereg

The estate in the agricultural town of Red Beach is a small estate, which is an example of architecture of the late XIX century. This estate is also called the estate of Gatovsky or Kozel-Poklevsky.

The architectural complex of Gatovsky Manor includes the main building of the estate's owners, farm buildings and a park zone. This estate in the agricultural town of Red Coast is included in the list of objects of the tourist route "Golden Ring of the Gomel Region".

Memorial in the village of Red Beach

This memorable and terrible place is also called "children's Khatyn." In 1943, in the village of Krasny Bereg the Nazis created a donor concentration camp for children. Now there is a memorial in its place, leaving most of the visitors can’t take away the tears.

The town hall in Chechersk is a unique monument of Belarusian classicism.

The Town Hall closes the perspective of the main street of the city and occupies a central place in the city. From the observation deck on the fourth floor of the town hall offers a beautiful panoramic view of the whole city.

Guests of Chechersk must visit the main attraction of the city, get acquainted with its history, and enjoy a beautiful view of the whole city.

Chapel of St. Euphrosyne of Polotsk in Rechitsa

Seeing the chapel of St. Euphrosyne of Polotsk on the high bank of the Dnieper in Rechitsa, you cannot pass by.

The Belarusian chapel is called Kaplitsa Saint Efrasinnі Polatskay, it incredibly attracts the attention of tourists, therefore it is one of the main attractions of the city.

Initially, the author named his monument the Jubilee Chapel. But this did not take root among the people, so here they call it "Chapel of Euphrosyne of Polotsk."

It is historical, and the chapel was built here for good reason.