The best parks and square parks in Minsk

Minsk may well be proud of its parks and square parks, which are an excellent place to relax for a company of friends or the whole family. It just so happened historically that due to constant destruction, Minsk cannot boast of a large number of architectural attractions. But this absence is generously compensated by nature in the form of parks; gardens and squares that you can visit with friends, or have a nice time with your family; take a walk with your girlfriend. The capital of our homeland, Minsk, is a green, modern city, ready to shelter travelers tired of glass metropolises. There are dozens of parks and a magnificent botanical garden known throughout Eastern Europe on the territory of the city.

We present you a list of 11 best parks and squares in Minsk, in our opinion, which should be visited.

Victory Park was opened in 1945 in honor of the victory over Germany in the Great Patriotic War. In 2008-2011, the park was reconstructed, sports grounds were renewed, a pedestrian bridge to Bird Island was built and a bridge to Komsomolsky Island was reconstructed, where now a real outdoor gym is equipped. The rescue station was rebuilt, embankments were equipped, several fountains, the motor ship “Nova Niasvizh” began to ply along the lake. Victory Park is a great place for a promenade, walking with children and spending a long-awaited weekend. It is especially popular among lovers of hiking and cycling, thanks to its convenient paths. There are more than 25 km of them on foot and almost 3 km on bike.

One of the main objects of the park is the Museum of the History of the Great Patriotic War.

In front of the museum, on a hill near the intersection of Pobediteley and Masherov avenues, there is a memorial complex “Minsk - Hero City”.

In the park, you can rent bicycles, rickshaws (ecological type of 2-seater transport), ride a catamaran.

Victory Park is located in the Central District of Minsk near the Komsomolskoye Lake reservoir. It is bounded by Pobediteley and Masherov avenues, Orlovskaya and Starovilensky tract streets. The park area is 200 hectares. (For comparison, the area of ​​Victory Park in Moscow is 135 hectares.) It is part of the water-green diameter of the capital. 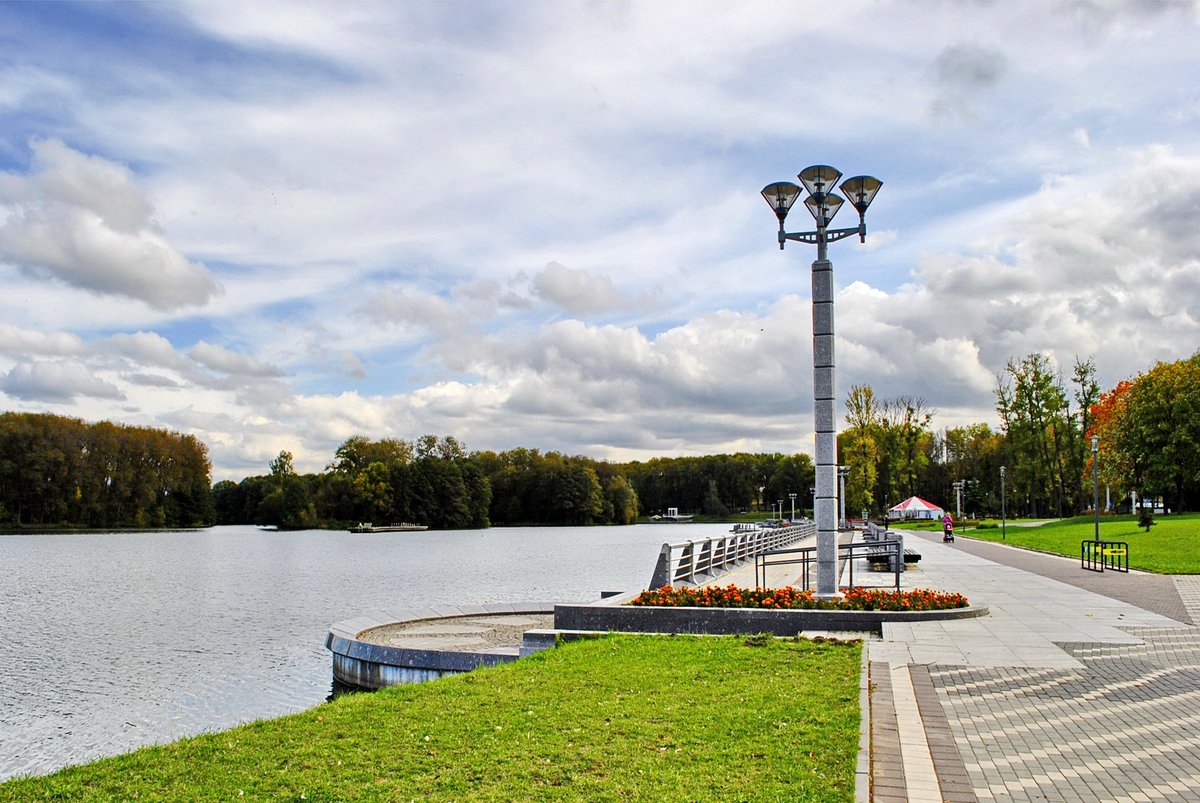 The territory of the park is divided into functional zones: quiet recreation, sports and recreation, recreation for children and adolescents, dance and playgrounds, attractions, administrative and outbuildings.

The park is home to about 22 thousand trees. It is dominated by deciduous trees. There are several specimens of cedar. The plantations of natural origin in the park are dominated by pine, Norway maple, and warty birch. Ornamental tree species (chestnut, linden, maple, birch, mountain ash, spruce and others) have been planted along the main alleys throughout the territory.

The total area of ​​the territory is 59 hectares. The popularity of the park is due to its proximity to transport communications - it is adjacent to the main avenue of the city and the Park Chelyskintsev metro station. This is one of the few places for recreation of a social orientation for people of different ages.

There are 16 attractions in the park, 9 of which belong to the park. In 2010, a new 28 meter high Ferris wheel was installed.

There is a night bike rental near the Chelyuskintsev Park. On Friday it works until seven in the morning, on other days - until three in the morning. Two-wheeled vehicles are provided here with an unusual, neon-illuminated vehicle. According to the rental organizers, cruiser bicycles will appear soon. They are very stylish and comfortable.

The layout of the old garden has been almost completely preserved. The layout is based on three straight alleys, crossed in different directions by paths and paths. The park is rich with architecture of small forms: pavilions, pedestrian bridges and others. More than 60 species of trees and bushes, mainly local species, grow in the park: birch, spruce, pine, mountain ash, willow. There are also rare plants: cedar pine, Californian fir.

The park is located in the city center close to transport communications - it adjoins the main avenue of the city and the Victory Square metro station between Yanka Kupala, Frunze, Pervomayskaya streets and Independence Avenue and covers an area of ​​28 hectares. 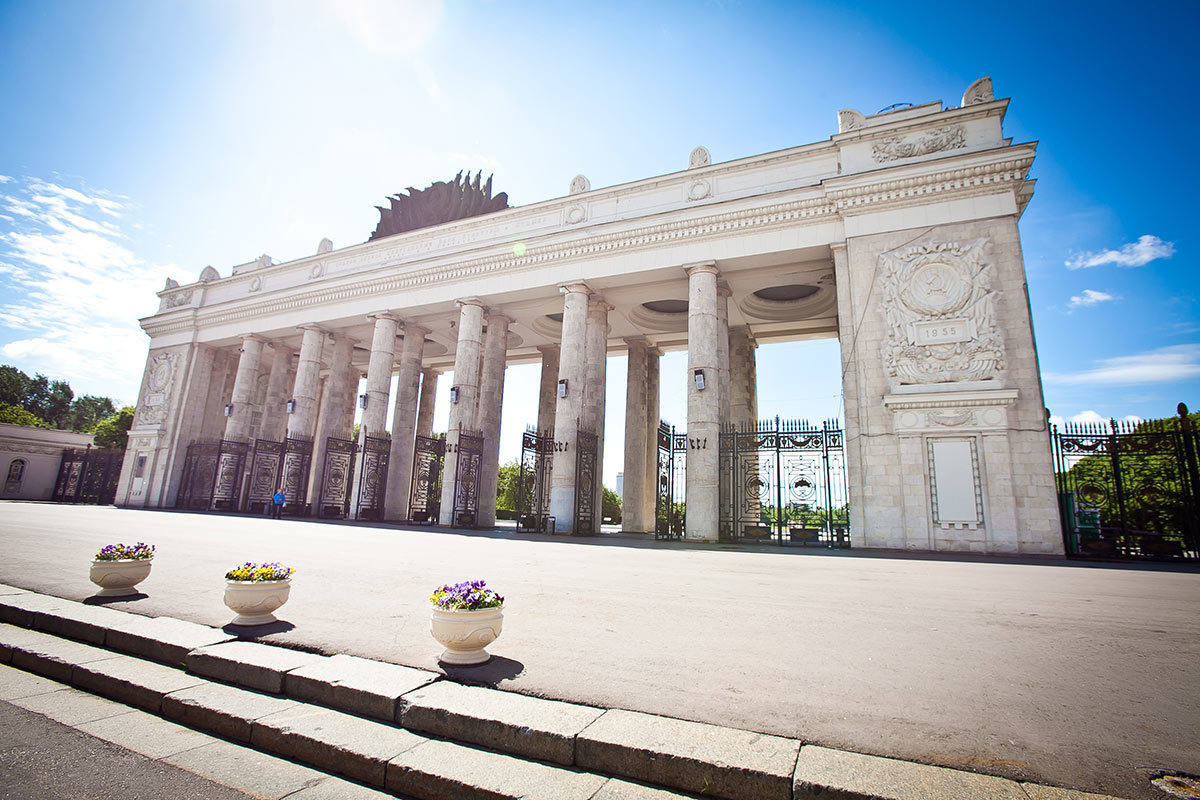 In Loshitsky Park, traces of all epochs of gardening art in the entire history of Belarus have been preserved. More than 36 thousand trees, 16 thousand shrubs grow here; there are ruins that are more valuable than any modern time. In the park you can see the Lubansky estate, the ruins of a mill (19th century), and the annual free festival of food, beer and music A-Fest in August. This park is located in the very center of Minsk, and with all your desire you will not pass by. The Svisloch River flows along the edge of the park, and in the center there is a small pond with ducks, near which you can relax on a bench. The park is also great for cycling, as the central bike path passes through it. There is also bicycle rental.

The Central Botanical Garden of the National Academy of Sciences of Belarus is one of the main attractions of the capital. Here you can take excursions to the diverse flora in the exhibition greenhouse, as well as plunge into the world of citrus plants, as well as conifers and deciduous plants. This place is a treasure trove of natural resources and will appeal to lovers of flora and fauna.

The Minsk Sea, also known as the Zaslavskoe reservoir, is the second largest artificial reservoir in Belarus. It was called the sea, as many people spend their leisure time there and relax like in a seaside resort. The Minsk Sea is located 17 km north-west of Minsk, on the northeastern slopes of the Minsk Upland, at an altitude of about 210 m. There are about 10 beaches with a well-groomed territory on the coast of the Zaslavsky reservoir. Each beach has its own free public toilet, changing rooms, parking, cafes and restaurants. There are many entertainments on the shoreline of the reservoir, you can play volleyball, ride water bicycles, yachts on the Minsk Sea, learn how to windsurf or take a walk on a motor ship or boat. Also, for lovers of water walks, there is an opportunity to ride a catamaran or Jet Ski. At night, vacationers can dance in open-air discos, enjoy fireworks and fire performances.

The Yanka Kupala Park in Minsk is located on the banks of the Svisloch River. This is a fairly large park area, which is a place of recreation not only for Minsk residents, but also for guests of the capital. Today a visit to this picturesque place is included in many sightseeing tours in Minsk. For cycling lovers there are bike paths. Fresh air and an atmosphere of complete tranquility and tranquility in the very center of a large metropolis will not leave anyone indifferent. This amazing place is definitely worth visiting. 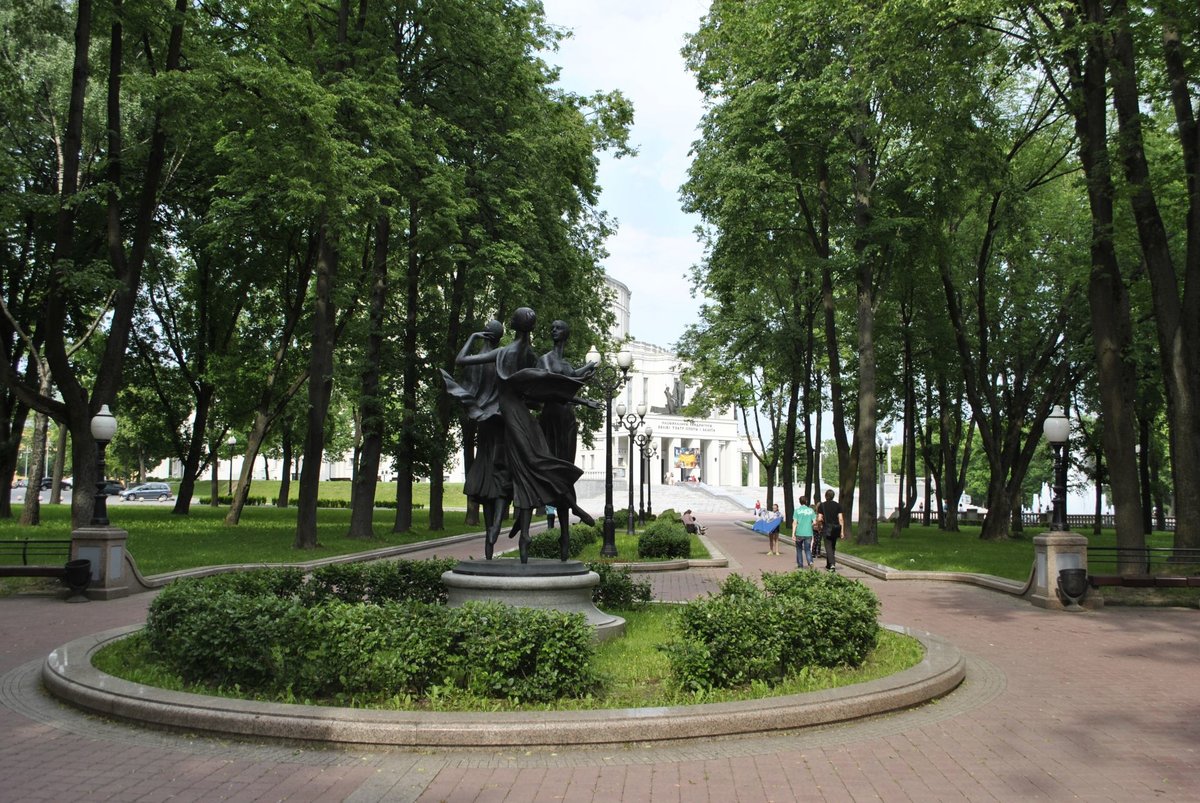 Mihailovsky Square Park is located in the Oktyabrsky district of our capital. The square is a real green oasis among the concrete buildings of the modern capital. The square is one of the favorite places of the Belarusian students. Not far from it there are educational buildings of Belarusian state universities, so it is not surprising that students of the Belarusian State University and Belarusian State Medical University have chosen it. The sculptures located in the picturesque Mihailovsky Square deserve a special mentioning. “Minchanka” (or, according to other versions, “Stranger”) is the main model of the Minsk landmark. This is a sophisticated woman who escapes the summer heat under the canopy of trees. She sat down on one of the park benches and happily poses for everyone who wants to take a good shot with a local resident. No less popular is “the Girl with an Umbrella”, which happily greets all the guests of the city coming from the railway station. Interesting and “Lighter”, which is one of the most mystical sculptures in Minsk.

The Bird Island is a small island-reserve of Minsk, which is located in the center of the capital. In summer, more than three dozen rare birds live on the island; some of them are included in the Red Book. There are paths raised above the ground. An artificial path goes around the entire island, and looking up, you can see many small and large birdhouses. Behind the bridge you can see equipped beaches with umbrellas and gazebos. And also, there is a large stage on which concerts, theatrical performances and other cultural and entertainment events are held. There are numerous cafes and restaurants everywhere.

This park is considered the most beautiful park in the capital. On weekends, there are crowds of people walking. Not so long ago, the vicinity of the Drozdy reservoir was considered an almost deserted outskirts of Minsk. Gradually, a cottage area grew next to the reservoir, then the symbol of the 2000s – “Minsk-Arena” appeared, and then large-scale construction of Lebyazhye began. Earlier the forest park was surrounded only by fields and water. Now everything has changed. To get to the Drozdy forest park, you need to get off at the bus stop near the Minsk-Arena and walk along Tihaya Street along the cottages to the reservoir. First you will see the beach; the path along the coast will lead to the dam and the gateway. In several places, concrete structures form picturesque waterfalls and bridges, along which one can go to the opposite bank of the river. The park impresses visitors with its mystery and unknown things.

The square park was founded in 1872 on the New Market Square and received the name Aleksandrovsky thanks to the Alexander Nevsky chapel built here three years earlier. In 1874, in honor of the opening of the city water supply system, the first fountain in Minsk with a sculptural decoration “A Boy Playing with a Swan” appeared in the center of the park. Along the perimeter of the park there are several monuments of totalitarian architecture of the middle of the 20th century: a granite government platform from which the Belarusian leadership received parades, the Officers' House, a monument-tank T-34, the residence of the President of the Republic of Belarus.