Top 10 attractions of the Brest region

The Brest region is the most European part of Belarus, as it has a common border with Ukraine and Poland. The most famous sights of the region are the national park Belovezhskaya Pushcha and the Brest Hero Fortress, but this is far from being a side-altar of tourist prospects. Today we will get acquainted with other sights of the Brest region and tell you why it is worth visiting.

The entire territory of the National Park is divided into four zones: reserved, regulated use, economic and recreational - so it becomes an object of admiration for all tourists. Here is the most low-lying swamp in Europe - Dikoe, but there are no natural lakes here.

Tourists are attracted here by visa-free entry. Foreigners can stay in the Belarusian part of the forest for 3 days without a visa. You only need to have your passport, insurance and a completed application form with you.

It is easy to get to Pushcha from Minsk: straight along the M1 highway before turning to Zhabinka, then to the town of Kamenets and the village of Kamenyuki along the P83.

Largest tourist attraction and must-see. Since the fortress was not completely restored after the war, it was decided to build a memorial complex on its territory in honor of the memory of the heroes.

The complex originates from the main entrance in the form of a huge star cut in the middle of the concrete structure. The heart of the whole composition is occupied by the "Courage" monument, a 33.5-meter-high sculpture of a warrior, on the reverse side of which there are relief compositions telling about individual episodes of the heroic defense of the fortress.

The 100-meter Bayonet obelisk can be seen from anywhere in the fortress, because it is connected to the main structure by three rows of tombstones.

The sculpture entitled "Thirst" represents a Soviet soldier who is trying to scoop up water, barely collecting strength into a fist. The monument symbolizes the heroic deed of the people, who held the defense and did not surrender, despite the fact that there was no strength left.

Crowds of people can often be seen in the Ceremonial Square. The entire memorial complex honors the memory of the heroes of the war, so the eternal flame and decorative lighting are burning for them.

The fortress is located 30 minutes walk from Brest, so tourists can easily find their way to the main attraction of the Brest region. 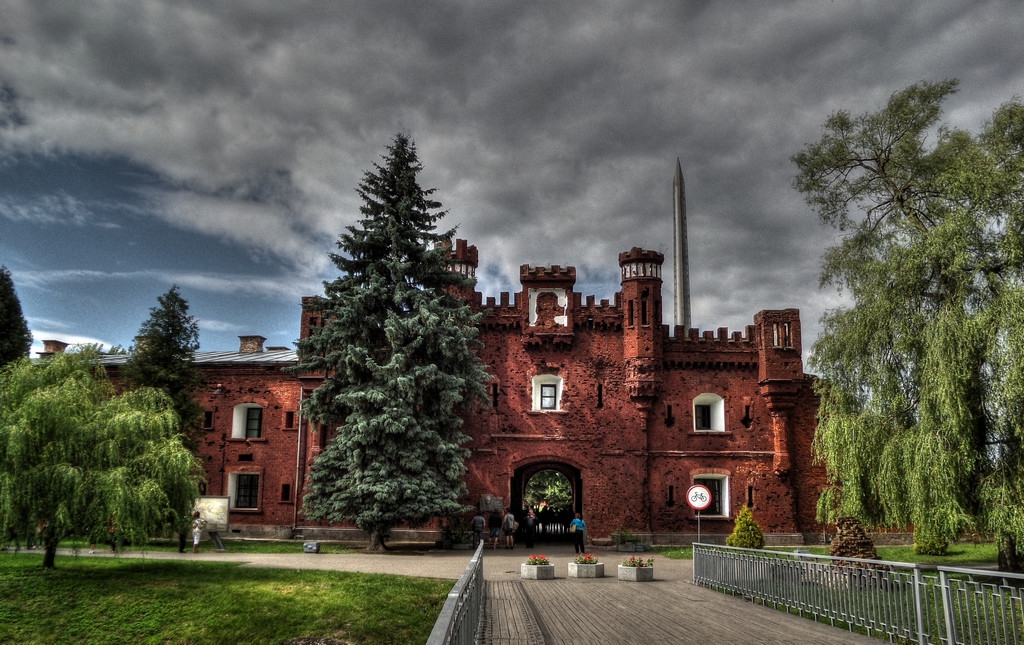 The Brest Archaeological Museum is unique in its kind. This is the only museum in all of Europe whose theme is based on the history of the Slavic-Eastern medieval city. The museum is located in the historical center of Brest, namely on the territory of the Volyn fortification of the Brest Fortress. The main exposition of the museum is archaeological excavations. For example, at a depth of four meters, there is a part of a handicraft quarter - 28 residential and civil buildings. The museum managers are trying to keep up with the times, and thanks to their efforts, an online interactive has appeared, in which various invitations, tickets, coupons are raffled off. For the entire time of the museum's work, the number of visitors has exceeded 4 million.

The station in Brest dates back to 1886. Then its first building was built. The opening was attended by Emperor Alexander III. Throughout its history, the Brest railway station has been destroyed more than once, but it has always been restored and expanded over time. In 1915 it was destroyed during the retreat of the Russian troops, but was restored by the arriving Poles. In 1941, along with the Brest Fortress, it took on the first blows of the German fascist invaders. It was partially destroyed and did not function until 1949. At the moment it is the most unique station in Belarus. The uniqueness lies in the fact that two types of current are connected at the Brest railway station: direct (from Poland) and alternating (from Minsk).

Estate of the Nemtsevichi in the village of Skoki

This building is unique in that during its centuries-old history it was both a school and a garden with old trees, and the headquarters of the Supreme Commander-in-Chief, and a museum. It began in 1770. The construction was financed by Marceliy Stanislav Kost Ursyn Nemtsevich. Its oldest family dates back to the 16th century in the Grand Duchy of Lithuania. The descendants of the Nemtsevich family held high positions in the Commonwealth and the Russian Empire. It should be noted that the wars that took place on the Belarusian land did not spoil its main structures. Nowadays, the Nemtsevich Manor serves as a museum that shows the life of a prosperous gentry of the times of the Grand Duchy of Lithuania and the Commonwealth.

The Kamenets Tower is the best-preserved Volyn-type defensive structure in the Brest region. The beginning of the construction of the tower - 1271 A.D. It was from the Kamenets Tower that the history of the city of Kamenets began, which it was decided to build on the territory of what was then Volyn. Many bloody wars took place under the walls of the tower. She withstood the raids of the Crusaders, and the war between the Swedes and the Russians on the territory of the Commonwealth, and two world wars. In all wars it was a military warehouse with provisions and ammunition.

Located in the village of Ruzhany, the castle is the largest palace and park ensemble of the 17-18 centuries. It was designed by the Austrian architect Becker by order of the princely family of Sapieha. The history of the Ruzhany castle is much sadder than the history of the buildings described above. The wars of the Commonwealth with Sweden and the Russian Empire caused colossal damage to the castle, but within ten years after the end of the wars it was successfully restored. In 1915 it was practically destroyed, but by the end of the 30s of the twentieth century it was partially reconstructed. In 1941, it was completely destroyed by the German fascist invaders.

Palace of the Puslovskys in Kossovo

The city of Kossovo is located in the Brest region, Ivatsevichesky district. Has a rich medieval history. The owners of the city were such dynasties as the Flemmingi, Khreptovichi, Sapegi, Sangushki. But it was thanks to the Pusslovskys that a carpet factory appeared in the city and about sixty churches were restored on the territory of modern Ivatsevichi. A little later, the main architectural work - the palace - appeared. In 1944, a multi-day fire destroyed almost all of the decoration and damaged the supporting structures of the palace. Despite the high degree of damage, a decision was made to reconstruct the palace, which has not yet been completed. 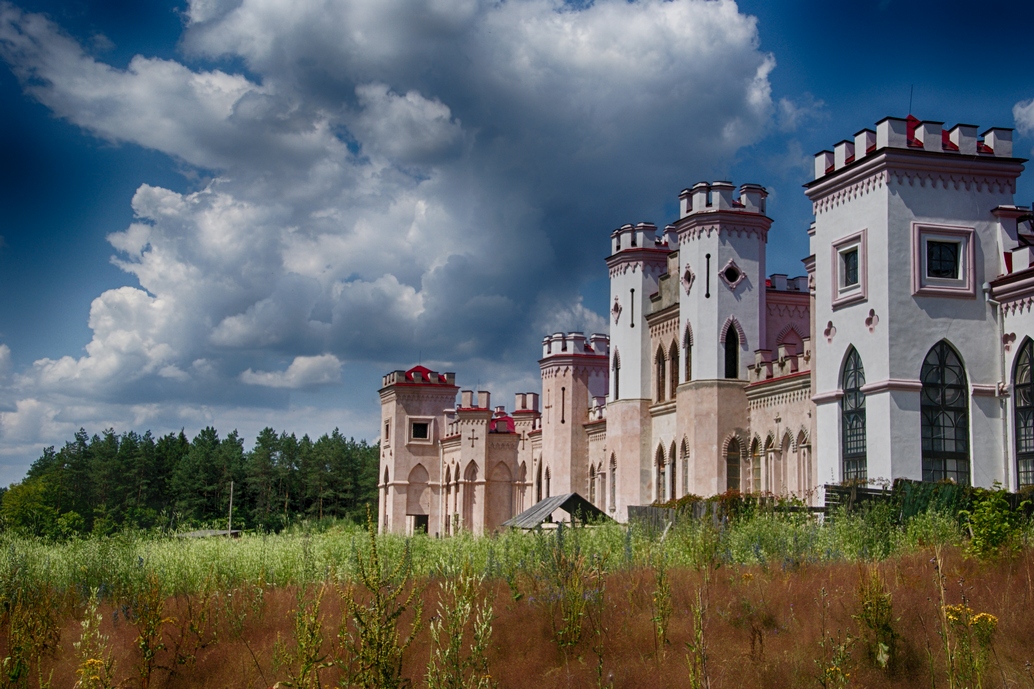 Church of the Holy Trinity in the village of Ishkolod

Despite the fact that the church cannot boast of outstanding dimensions, it is included in the list of historical and cultural values of Belarus. It is the only monument of the 15th century of the late Gothic. The dimensions of the temple are 26 by 14 meters. Due to frequent restorations, it has changed its original appearance and is now a church-museum.

While the lack of accurate information about the birthplace of Tadeusz Kosciuszko haunts historians, museums in Malye Sekhnovichi and Kossovo, which claim to be the homeland of the hero of two continents, invite tourists, offering to get to know the life of the famous Lithuanian. Portrait of Tadeusz Kosciuszko by Karl Gottlieb Schweikart. To this day, the controversy over the birthplace of Tadeusz Kosciuszko does not subside. According to the most common version, the hero of Belarus, Poland and the USA, an honorary citizen of France, was born in the Merechevshchyna tract, which is near the city of Kossovo (the territory of the present Ivatsevichi district).