Guests of the city of Grodno and local residents know firsthand about the local «diamond» of architecture - the Svyatopolk Chetvertinsky Palace. This complex dates back to 1908, when the one-story building passed into the possession of the heirs of the Ruriks. These were people of high standards in everything, so they wanted to turn their homes into a real work of art.

The architecture of the Chetvertinsky Palace

Thanks to the efforts of a talented architect of Italian-Polish origin, Vladislav Macroni, this building has received a new life. He designed and built a neo-baroque castle project. The palace was supplemented by a regular park, an outbuilding, a mill and a utility yard. The palace was a family nest until 1939. A solemn, complex richly decorated style can be observed in the design of facades, spires, and interior decoration. Unfortunately, in view of the strongest desolation inside, the castle has retained only a staircase and a ceiling with stucco molding, the decoration of the walls and floor does not correspond to the external shocking of the building. In the design of facades, rasprepka is widely used, when part of the wall is exposed slightly forward or, on the contrary, deepens along with all the elements. The result is an alternation of convex and concave sections with the effect of a spatial illusion. All kinds of bay windows, towers and balconies make the facade composition even more expressive. Baroque facades are actively decorated with columns, large volumetric relief, and bow-type pediments. 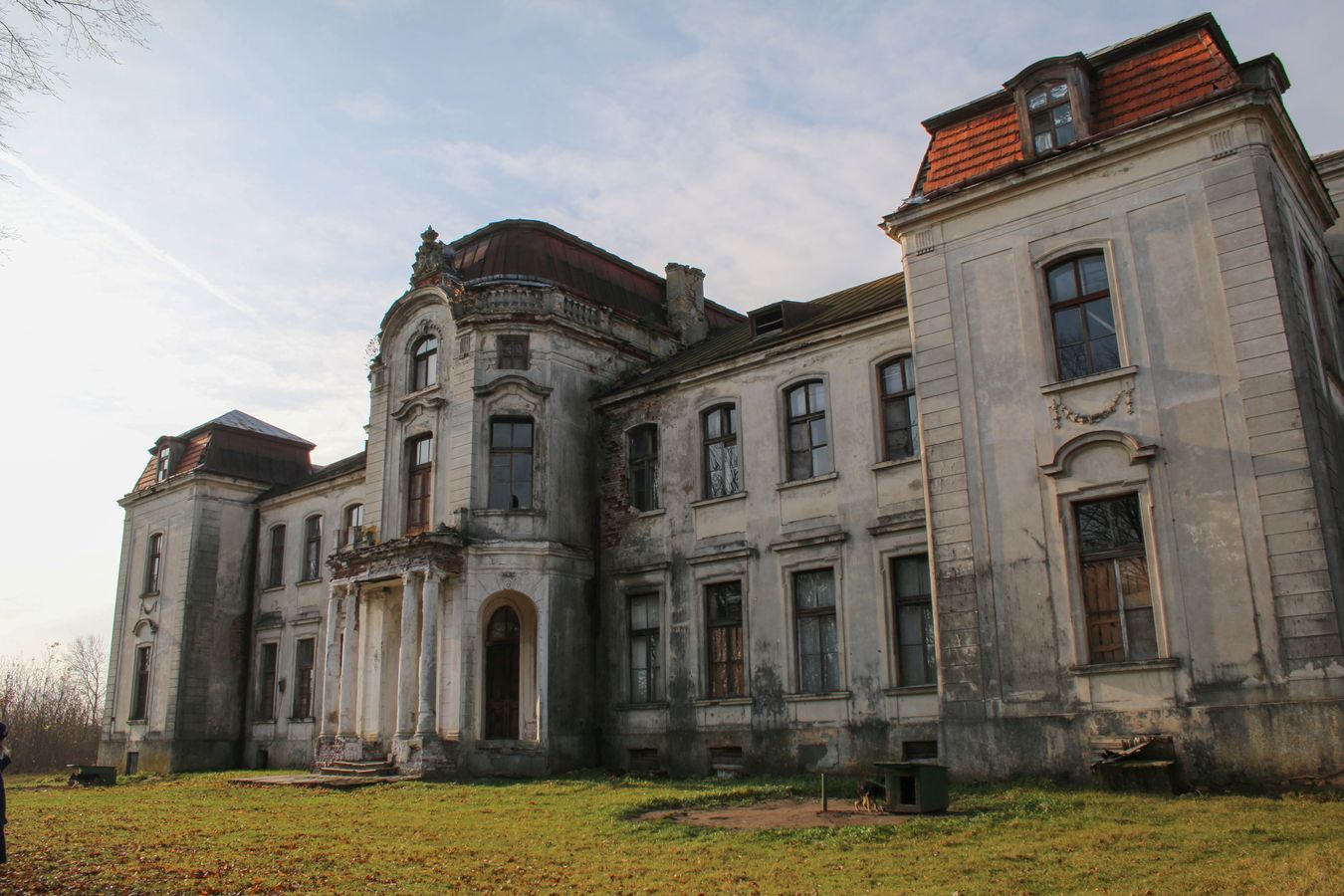 Interesting facts about the Chetvertinsky Palace

The history of this complex began in the 1490s, when a wooden church was built by the prince of the Grand Duchy of Lithuania in the village of Zheludok (emphasis on the last syllable). Representatives of more than one generation of noble families of the Grand Duchy of Lithuania lived here; at one time more than two hundred households lived here, which at that time testified to the scale of the city. The one-story building from which the Palace was later built was a family nest until World War II. It should be noted that during the First World War, the building did not suffer significant losses, but after the capture by the Red Army, the desolation of these lands began. By that time, there was not just a Palace, but a real palace and park complex, with its own distilleries, factories, pharmacy, school, hospital, post office, veterinary station and even a sawmill. Svyatopolk Chetvertinsky was such a big business executive. After that, these estates began to be used as warehouses, then they were occupied by the Germans and a military hospital was placed right in the palace.

From 1960 to 1983, a military air defense unit was based here. And then military equipment simply stood here, until the collapse of the USSR, when in 1992 the lands and the estate were transferred to the Academy of Sciences of Belarus. Unfortunately, this change of ownership did not bring any positive changes to the fate of the estate, no reconstruction of the building was carried out and the premises of the Palace continued to fade more and more, the stucco molding and colored frescoes on the walls suffered especially. Until in 2014 it was bought into private ownership by a family from Russia, after which a caretaker appeared here, who monitors the preservation of the dilapidated remnants of its former greatness. To visit the inside, be sure to contact the caretaker, who will lead a detailed tour of the palace.

Location of the Chetvertinsky Palace

This interesting architectural monument awaits you in the Shchuchinsky district of the Grodno region in the village of Zheludok. This picturesque place is located in a forest thicket, where interesting species of trees from the park, which belonged to the Chetvertinsky family, are still preserved. There is a lake nearby, here in hot weather you can relax on a picnic and enjoy the coolness of the magnificent landscapes. Local residents will be happy to shelter tourists for the night for a nominal fee. By agreement, they can offer a bathhouse, horseback riding or take a boat ride on the lake. 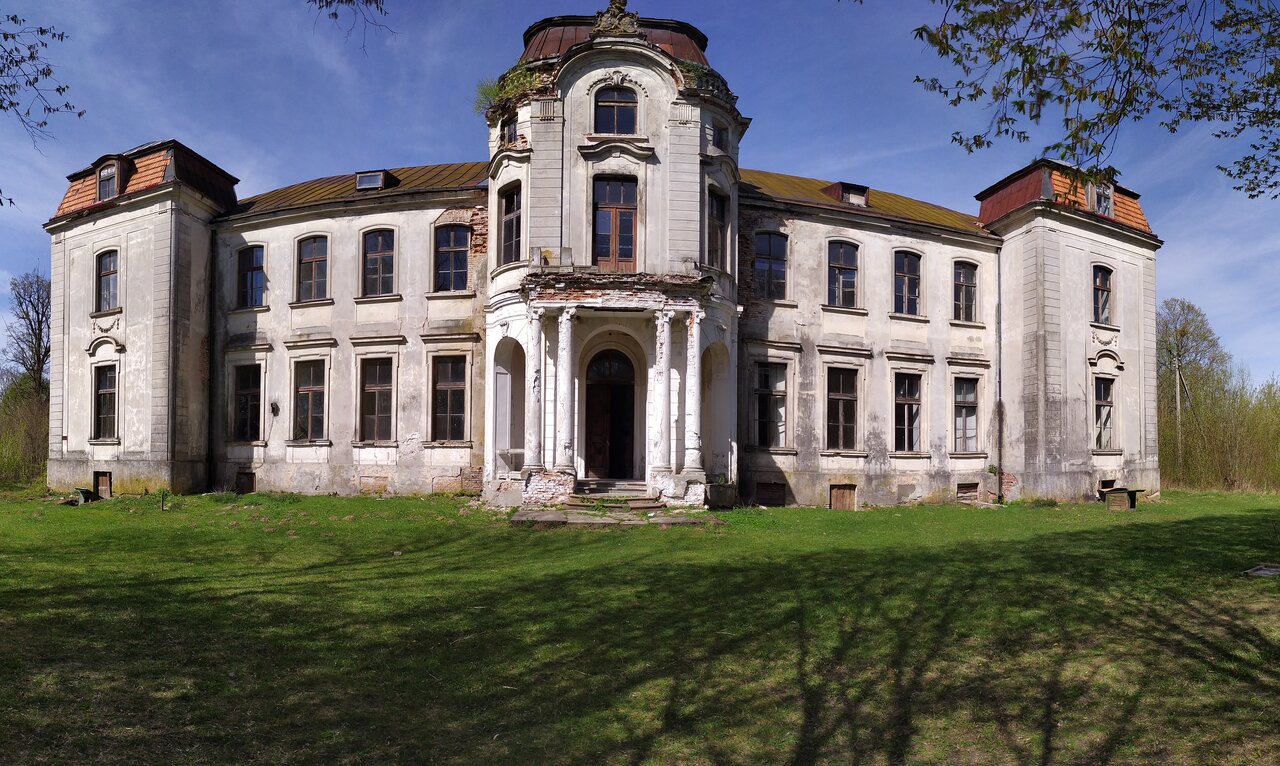 How to get to the Chetvertinsky Palace

If you are going to go by car, then along the M6 highway from Minsk the road will take a little more than two hours and the length is about 250 km. If you do not have your own transport, do not despair, as you can get by minibus to Grodno, and then by intercity bus from the bus station to the village of Zheludok. Attention, the bus runs once a day, so focus on the departure time in advance. For lovers of railway transport, unfortunately, there are no trains to the village, but you can get by train to Grodno.

Attractions near the Chetvertinsky Palace

• Church of the Assumption of the Virgin Mary is an architectural monument in the style of late classicism, built in 1852. The temple is included in the State List of Historical and Cultural Values of the Republic of Belarus.

• The palace and park ensemble in the village of Svyatsk - this building was built in the 17th century by a famous Italian architect. In its rich decoration, it resembles French Versailles, contemporary’s spoke of it in this way. This is the family estate of the Volovich family. The complex includes an English park, ancient ponds and canals. The highlight of the park were exotic plants brought from all over the world. After the completion of the restoration, a wellness complex, a cafe and a restaurant will open its doors here.

• Old and New castles in Grodno - the first defensive structure in Grodno, erected in the XI century on the banks of the Neman to protect against the attacks of the crusaders. The castle acquired its modern look - a palace and park ensemble in the Renaissance style - during the reign of King Stephen Batory. The new castle, erected at the beginning of the 18th century next to the Old one, served as a royal residence. Here an agreement was signed on the third (and last) section of the Commonwealth.

• Cathedral Church of St. Francis Xavier - a visiting card of ancient Grodno. At its consecration in 1705, King August II and the Russian Tsar Peter I were present. The complex of church buildings, including the monastery and the first pharmacy in Belarus (today a pharmacy-museum), occupied an entire block and was considered the most luxurious in the Polish-Lithuanian Commonwealth. The main shrine of the temple is the miraculous image of the Mother of God. The church is also famous for its magnificent wooden altar with carved figures of apostles and saints.

• Kalozha Church is an amazing monument of stone architecture of the 12th century and one of the oldest functioning churches in Belarus, according to legend, was erected on the site of the Kalozhan tract, known for its springs since pre-Christian times. A church that claims to be included in the UNESCO World Heritage List.

• Shchuchin Palace of the Drutskys-Lubetsky - a beautiful palace, built according to the project of the Vilna architect Tadeusz Rastvorovsky, exactly repeats the outlines of the Little Trianon palace in the residence of the French kings - Versailles. The representative of a noble Belarusian family, Francis-Xavier Drutsky-Lyubetsky, who served as ambassador to Paris, decided to build a residence with a picturesque garden in his homeland, modeled on the best French ensembles. Until the middle of the twentieth century, the palace was the family estate of the princes. After restoration, it will house a center for creativity of children and youth, a conference hall, a museum.

• Lida Castle - in the 14th century it was the main defensive structure against the attacks of the Crusaders. It was built by order of Prince Gedymin. To erect it, it was required to build an artificial island more than 5 meters high, separated from the city by a deep reservoir. Under Prince Vitovt, the famous khan Tokhtamysh, expelled from the Golden Horde, received refuge here. Currently, knightly battles and medieval reconstructions are held here annually as part of the «Sword of the Lida Castle» festival.