The electric car is a completely new but sensational vehicle around the world. If you still don’t know, this is an environmentally friendly car powered by electricity. In addition, it is much quieter than usual cars. Many advantages follow from this, such as environmental friendliness of the area: cities will become more comfortable for living, and due to lower emissions of polluting gases, life expectancy will increase. Today we will talk about the principles of operation of electric vehicles, as well as about all the details that you need to know when buying it.

The principle of operation of electric vehicles

Electric cars move under the influence of electricity, which initially gets from a regular home electrical network and is stored in rechargeable car batteries.

Such a car does not need a gearbox, because the motor shaft here is connected directly to the wheel. Electricity powers the motor, and the motor spins the wheel that drives the car. These cars pollute the environment much less and work much quieter than cars that "eat" gasoline.

Probably the only drawback of such a machine will be its charge. Since the car will need 6 hours to fully charge.

The electric car can be charged from a standard European outlet with a nominal voltage of 220 volts. Nevertheless, the station allocated for charging an electric car has advantages in speed and safety.

The advantages of electric cars

Among the well-known advantages of an electric car are:

• The absence of harmful emissions that affect so much the deteriorating ecology of our world;

• Comparative reliability and durability of the engine during long-term operation;

• Ability to charge batteries from a standard electrical network, which can significantly save on costs;

• High coefficient of efficiency, in comparison with engines of ordinary cars;

• Availability of emergency braking by an electric motor in electromagnetic brake mode.

Since this is still a new invention, there are several disadvantages of such a machine:

• they do not allow you to make long trips for several hundred kilometers and are intended mainly for movement within the same city. It is not yet possible to imagine an electric car calmly withstanding a trip from Vitebsk to Gomel;

• The time of a full charge of a modern electric car can be at best an hour, but usually it takes several hours to charge a vehicle. It takes at least 30 minutes even for quick and incomplete recharging;

Where can I buy an electric car in Belarus

Belarus is developing in the direction of electric vehicles. And today you can buy such a vehicle here. But where we will tell a little lower.

This is the first platform in the Republic of Belarus aimed at covering the theme of electric vehicles. The portal contains the latest news, test drives, videos and much more. A full-fledged community allows you to keep in touch and establish communications of electric motorists in the country.

The cost of electric car

Today in Belarus you can buy a used electric car from $ 5000. Expensive or not, you decide. But more and more people are switching to this type of transport in order to maintain the ecological compatibility of the planet.

VAT when buying an electric car

Decree of the Council of Ministers of June 9, 2020 No. 333 approved the procedure for the return to individuals of the amount of value added tax paid when purchasing an electric car from June 15, 2020 to December 31, 2025 in Belarus.

A serious problem for most owners of electric cars can be finding places to charge. Often the question arises about the compatibility of the vehicle’s electric charging systems with similar devices at local gas stations.

But the places to charge in the capital will not become a problem for owners of electric cars. Even an ordinary 220-volt home outlet allows you to recharge the battery by 100 percent overnight. At the same time, the cost of such a charge will be 2 rubles per 100 kilometers. And if we compare the electric car with the car in which the internal combustion engine is installed, then a significant savings in money.

The company provided gas station charging stations on the main highways of the country, as well as parking lots near major commercial, sports and cultural facilities, so that gas stations were available for most drivers. Now all Belorusneft gas stations will be called Malanka.

Charging an electric car in Belarus will cost 30-40 penny per 1 kWh. All electric cars consume about 30 kWh for every 160 kilometers. For example, a Nissan LEAF car, according to the manufacturer, consumes 30 kWh per 160 km. Another popular Tesla Model S electric car consumes a bit more on average: 35 kWh per 160 km.

If we are talking about the Tesla model S, then about a quarter of the battery needed to be charged to “full tank”, and the estimated charging time was 2 hours. Not fast, to say the least. A full charge from a red outlet will last about 8 hours.

The Tesla supercharger charges in less than an hour. It is quite possible to spend dinner in the case of a long trip, for example. 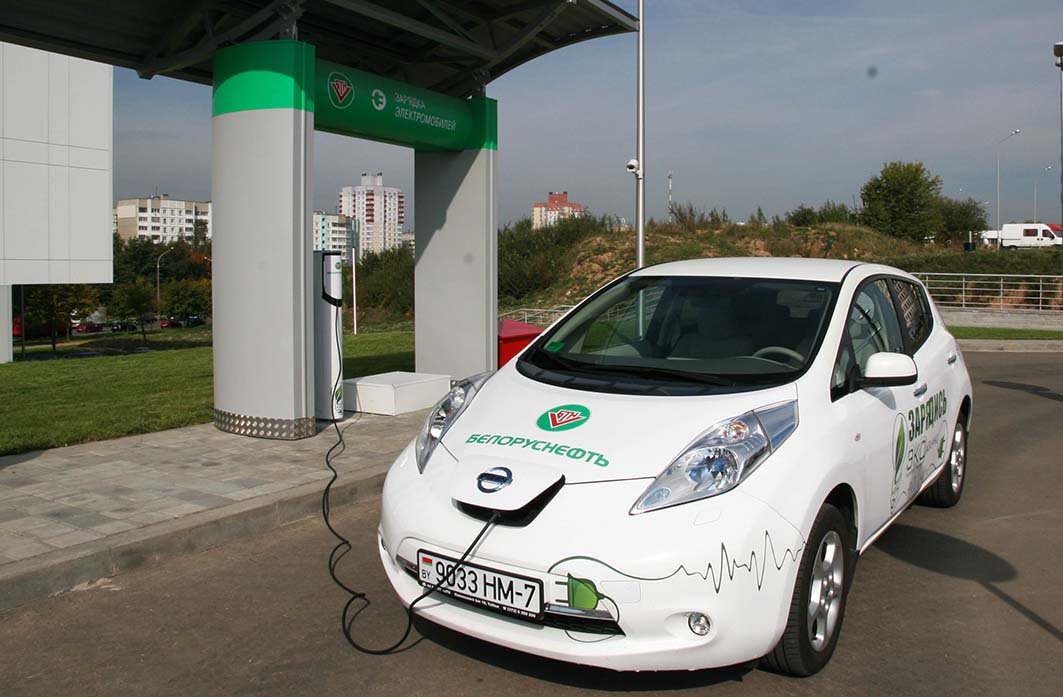 Environmental aspect of car use

The ecological context of using electric cars is the starting point, the main argument in discussions where people who prefer classic cars driven by an internal combustion engine and their progressive opponents participate.

At the same time, the researchers came to practically the same or similar conclusions: electric cars are less harmful to the environment than conventional fuel engines.

The developers have already introduced the electric cycle, which in dynamics will yield little to any sport bike. Moreover, the development is all-wheel drive. The design of the motor-wheel easily allows you to drive any of the wheels - at the front, at the rear, at least both at once. Any motorcycle with a "killed" engine or gearbox can be easily and simply converted into an electric one, preserving the original design.

Another socially significant development is a universal electric wheelchair drive. It looks like a steering wheel from a scooter with a motor wheel and a battery mounted on the steering rack. The design is mounted on a wheelchair and allows you to move at speeds up to 11,18 mile per hour. Moreover, it is thought out that people with disabilities can independently mount the "prefix-electric drive" on a stroller. In the future, the steering column will be foldable for greater convenience.

As for cars, developers admit that it drive, but are not yet for sale. As soon as everything works “on the clock”, Belarusian-made electric cars will go on sale right there.