A variety of visual experiments is characteristic of contemporary art. Against this background, Belarusian art looks quite traditional. However, the national art school does not strive for a single academic artistic implementation. Graphics, painting, photography, other types of fine art are developing in line with modern visual trends. There is a confusion and interaction of styles characteristic of European art.

The art of Belarus over the past fifteen to twenty years has been characterized by a variety and philosophical generalization of artistic images. Exhibition activity has significantly intensified, international festivals and exhibition projects are being held, artists are actively looking for their way in line with international trends. A new generation of Belarusian artists has formed that is capable of an unbiased perception of the most diverse trends in world art.

Many Belarusian artists are known for their remarkable creativity not only in our country, but also abroad. And in order to achieve certain successes, it was not necessary to join the Union of Artists or be awarded the highest award - People's Artist of Belarus. Some became such artists without having this title.

Of course, there is such a category of creators - pop artists.

For example, Andrei Smolyak, who is known primarily for portraits of famous Belarusian people. His works are more interesting to the mass audience, and they are mostly bought by representatives of the secular elite. Mostly those who are in these same works and depicted. True, the artistic value of his work can be discussed for a long time - will anyone remember Smolyak after 100 years? 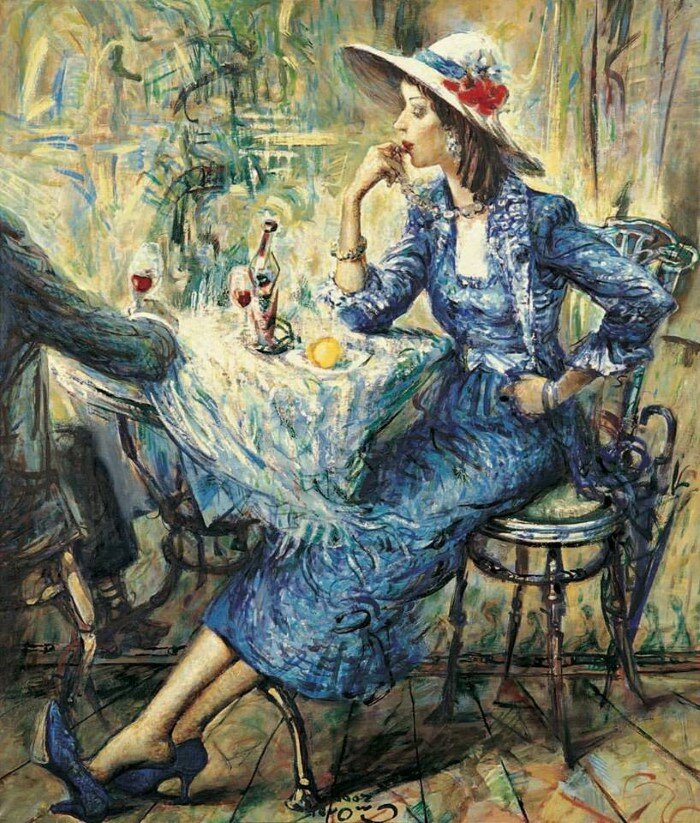 There are more interesting examples. For example, postmodernist Andrey Vashkevich. His work in solo exhibitions is also accompanied by an unusual design. We can say that they turn into a real show and performance, when our reality is combined with art, and together they form a common composition.

Unfortunately, many natives of Belarus left our country: someone for personal reasons, someone escaped from the war, someone because of ideological pressure. Marc Chagall, Chaim Soutine, Mikhail Kikoin ... Their paintings not only brought them fame, but became one of the most expensive in the world. Not to mention Belarus. It is especially sad that many of the works of Belarusian artists are either lost or are abroad. True, the situation is gradually improving: for example, over the past couple of years, through the efforts of BelGazPromBank, the works of Chagall, Kikoin, Vankovich, and Sutin have returned to their homeland. But there were no paintings of some of these authors in Belarus at all!

New names appear. Pavel Tatarnikov, Dmitry Traenovich, Sergey Rimashevsky, Lyudmila Zhizhenko. Take a look at their work and you will be pleasantly surprised. For example, Rimashevsky in his work pays a lot of attention to children, and Lyudmila Zhizhenko is one of the few artists in the world who uses the oil painting technique.

But this does not mean that folk artists are not worthy of attention. Take at least the monumental works of the "populists" Gavriil Vashchenko and Mikhail Savitsky. The latter, by the way, was awarded not only the national title in our country, but also in the Soviet Union as a whole, and also received the highest state award of the Republic of Belarus - the title of Hero.

His artistic style cannot be confused with anyone else. It would seem that you can still come up with such a traditional genre as landscape? After Shishkin, Aivazovsky, Makovsky, Savrasov, Tsvirko ... But he came up with! Whatever he writes: trees, rivers, huts, have a mark of eternity. And in this eternity you cannot confuse him with anyone and with anything.

His solo exhibition, which is presented today at the Mikhail Savitsky Art Gallery, has the name “Province”. The concept of the province in the Year of the Small Homeland makes us think about this word and its meaning. What is a province? Novogrudchina (the artist’s birthplace), Zaslavl, Volozhin, Ivye, Rakov, Lyubcha, Sverzhen (towns that he likes to draw)? Or maybe all of Belarus on the world map is a province? Or maybe the province is our heart in the heart of the universe?

The works of the Belarusian artist are in the collections of the National Museum of the Republic of Belarus, the National Center for Contemporary Arts, the Mogilev Regional Art Museum named after P. Maslenikov, the Grodno State Historical and Archaeological Museum. And also in the funds of the Adam Mickiewicz House-Museum in Novogrudok, the Belarusian State Museum of Architecture and Life, the National Polotsk Historical and Cultural Museum-Reserve. In addition, in the funds of the Belarusian Union of Artists, the Ministry of Culture of the Russian Federation, in private collections in Belarus, Belgium, Great Britain, Germany, USA, Israel, Lithuania, South Korea, Poland, Russia, Turkey, Ukraine.

The paintings of Alexander Solovyov are characterized by expressiveness of style, rich colors, expression and multi-vector composition. Alexander Solovyov is a landmark in creativity and a moral symbol whose work has its own energy.

"Alexander Solovyov is constantly on the lookout. When there is such an artist and his work that you can look back so that you do not accidentally turn the wrong way, it is very valuable for modern culture. It’s also important that the master’s paintings fit into the European context clearly ", said colleague Alexander Maley.

The artist, who turned 92 in September, in spite of the commercialization of art, remained faithful to himself and painted, without distancing himself from life.

At the age of 17, the artist participated in the partisan movement, since 1944 he was in the army and took part in the battles. Alexander was awarded the Order of the Red Star. Since 1965, he worked as a production designer at the Yakub Kolas National Academic Drama Theater, and later (until 1995), his chief artist. He designed more than 100 performances. In 2017, the artist was awarded the Order of Francis Skorina. 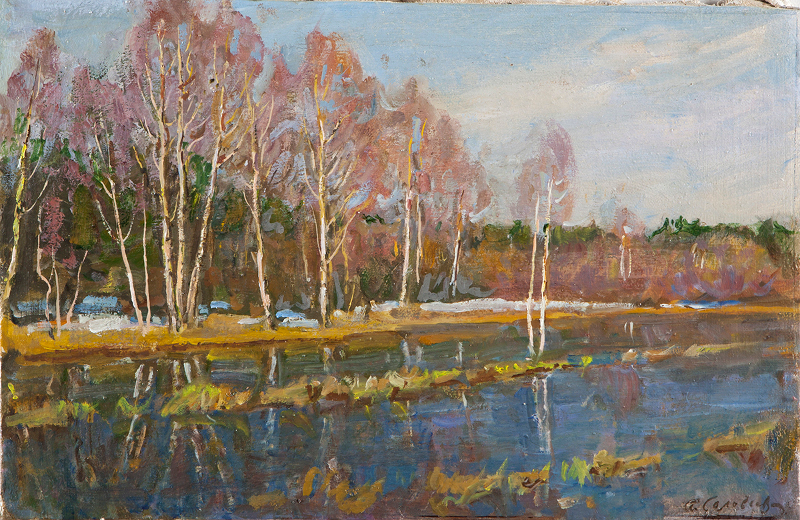 Poster. She graduated from the State Art Institute of the Estonian SSR (1973). The artist works in the political and theatrical poster, book and magazine graphics.

Lyudmila was born on 08/03/1946 in Minsk. In 1964 she entered the Belarusian State Technical Art Institute (Belarusian State Theater and Art Institute). In 1973, Lyudmila graduated from the Department of Graphics of the State Art Institute of the Estonian SSR with a degree in poster. Works in political and theater posters, easel, book and magazine graphics, as well as in painting. Since 1992 she lives in the Netherlands. Lyudmila’s works are in the State Art Museum of Belarus, the Museum of Modern Art of Belarus, the Museum of Posters in Wilanow (Poland) and Kanagawa (Japan), as well as in private collections in the Netherlands, Germany and others.

Vyacheslav Pavlovets is one of the outstanding watercolorists of Belarus. Some of his works have already become classics of art and are included in many albums, private collections and a permanent exhibition of the National Museum of Art (18 paintings by the master are stored in his collections). Monochrome minimalistic landscapes glorify the Belarusian nature and its sunless “gray day”. The mastery of white, gray, and paper is impressive. If you look at the paintings for a long time, it may seem that they are colored. And this is the manifestation of professionalism, magic of this artist.
Pavel Tatarnikov

Pavel is a modern Belarusian illustrator. The task of the illustrator is to create an image. Do not describe, do not repeat the text with a picture, but add some kind of reality. Then the book itself will turn out as an integral work, and illustration in it as a special kind of art. This is not a picture that can be seen on the wall in the frame. Here you need to think in turns, and all the details should appear at a distance of 30 - 50 cm from the eyes when a person holds a book. The artist’s illustrations fascinate with transparent fragility, attract the eye, but do not distract from the text, but give it additional meaning. It seems that people and landscapes in these paintings have come down from ancient engravings. But at the same time, in his works there is no facet of epigonism. Before us is an original artist with his own style, manner of writing, vision of the world.

The artist lives and works in Minsk.

From 1997 to 2002, she studied at the Republican College of Arts. From 2002 to 2009, Jeanne continued her art education at the Belarusian State Academy of Arts (department of graphics). Since 2010, she begins to conduct active art activities.

Since 2015, Jeanne has been the editor of the INDEX Encyclopedia.

Zhanna Gladko is a representative of the young generation of artists, working with a variety of media with a gender theme in the context of current feminist theories, as well as other topics.

Collages Masha Svyatogor people adore and hate, they are described as "practices of absurdity" and explain the loneliness and melancholy of young people in the scenery of the "last dictatorship." The photographer reacts calmly to criticism - collecting a therapeutic collage from haters hits, and declaring his love for his native outskirts of Minsk (Kurasovschina) in the name of his first solo exhibition, held in the TsEH art space.

A collage as an escape or a means of dialogue with reality, documentary surrealism or a crooked mirror of today's Belarus.